The third and penultimate round of the 2014/15 BikeArt Winter Series was run on Sunday 25th January, at Fire Road 10, Mayday Meadow in Thetford Forest. The event is organised by Thetford MTB Racing. 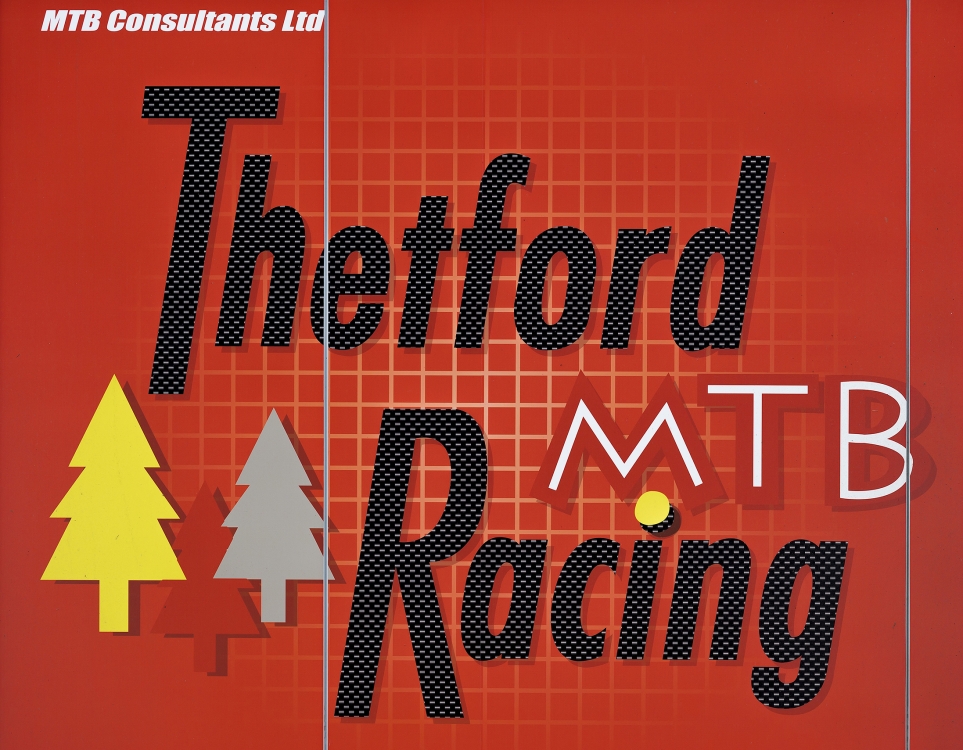 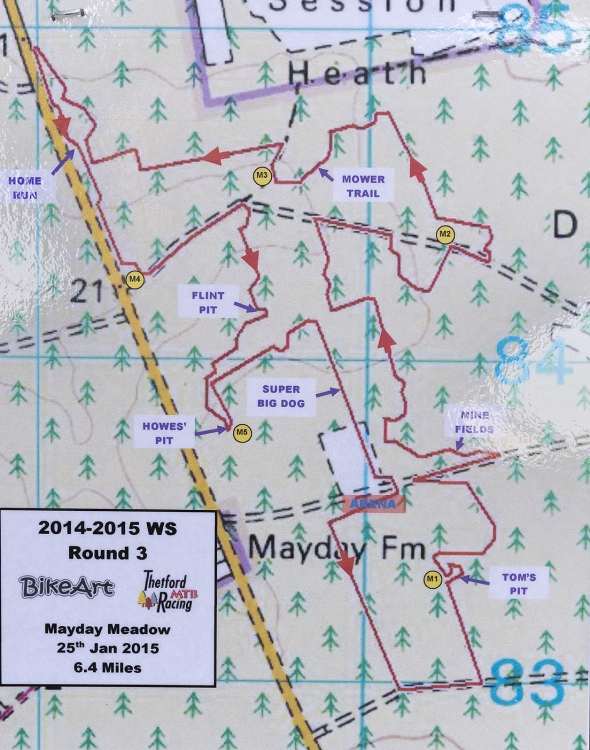 Bright sunshine and a frosty ground at the start saw the entrants lining up on a firm to good course surface, the frost slowly melting through the event.
A few of the categories had maximum points riders who, if they could repeat their success, would secure their Winter Series win with a round in hand.
The 2-Hour Solo Female 18-39 category leader, Laura Sampson, No: 658 (GRT/Sussed Out Suspension) was one of these, with two wins already notched up in the November & December events.  Laura did not disappoint and romped home with a one lap lead over round three second placed rider, Vanessa Holmes No: 672 (Arrow Cycles) and third placed Sarah Ivory No: 677.
At the start of the 2-Hour Solo Female 18-39,  Vanessa Holmes No: 672 (Arrow Cycles) was keen to put some distance between herself & category leader No. 658 Laura Sampson (GRT/Sussed Out Suspension) . 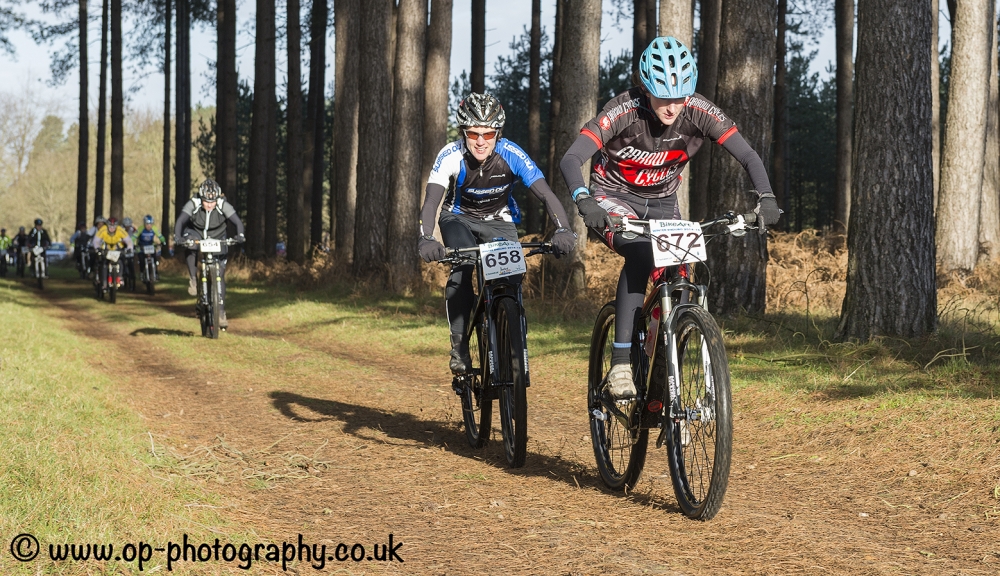 Laura Sampson, No: 658 (GRT/Sussed Out Suspension) 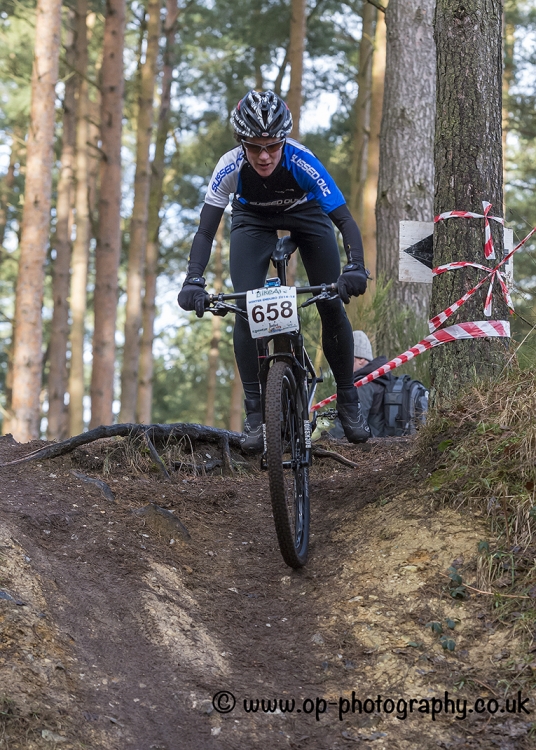 Another rider with maximum points from the previous two rounds was Paddy Atkinson No: 608, in the 2-Hour Solo Junior Male 14-17 Category.
Paddy's ride was blighted with a chain failure during lap 4 and saw him scooting his bike round to the meadow pits for a quick chain repair. With the seconds ticking away and second placed Ross Marriott clawing back Paddy's approx 7min lead there was an element of excitement but in truth Paddy had done enough with his previous lap times to do the repair and still take his third successive win, securing the Winter Series category title.
Paddy Atkinson No: 608 before his chain malfunction. 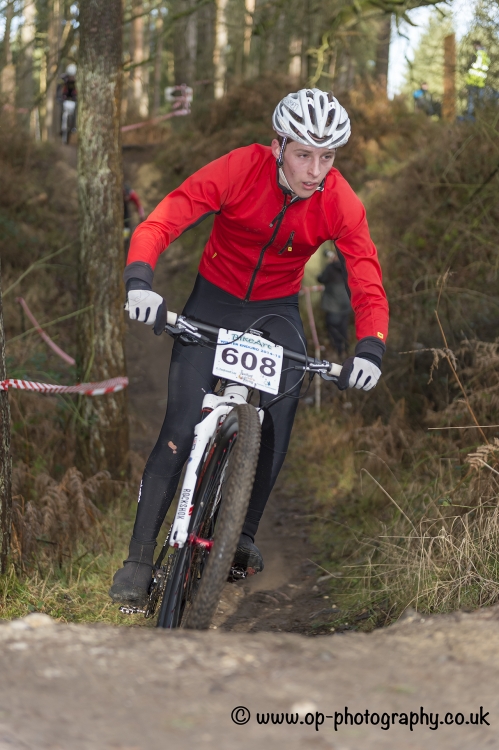 Paddy Atkinson No: 608 repairing his chain. 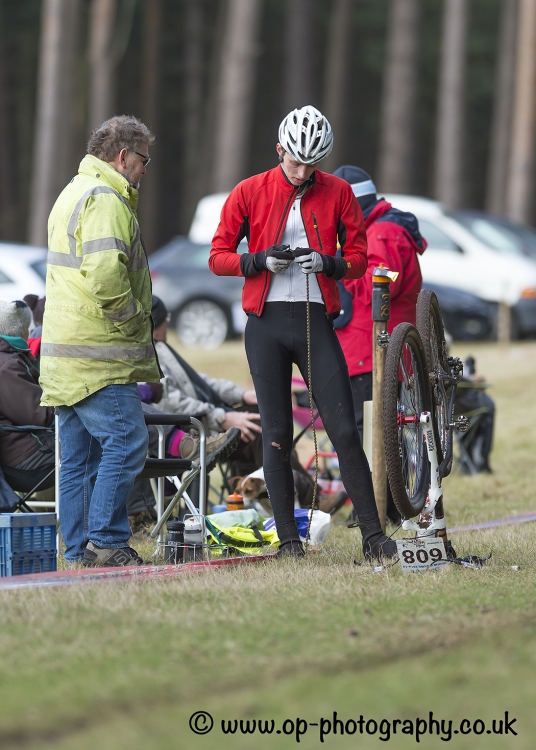 Paddy Atkinson No: 608 repairing his chain.
No.602 Ross Marriott (Nakedbikes/Hewittladders/Impsport). His second place in the 2-Hour Solo Junior Male has improved his chances of a podium going into the final race of the series. 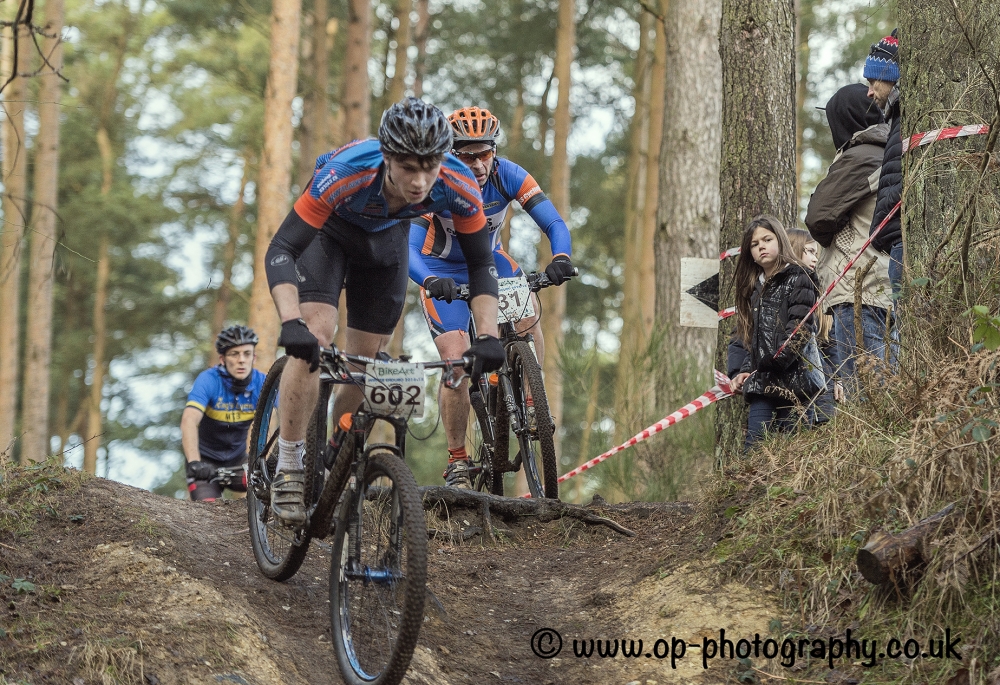 Jonathan Sheasby No. 719 (Transition Cycles Ltd/G.S.Sheasby Ltd), 4hr Solo Male rider, followed by No. 725 Tom Ward (Newdales RT) and fourth placed 4hr Vet Jason Nunn No 816 (EHF Racing Velopro). The second & third place in the 4hr Vet's series points is harder to call and may well go to the final race.
Looking forward to seeing the Series points table update, when it comes out.
The 4-Hour Solo Male 40+ category has been dominated in the previous rounds by the phenomenal Paul Ashby who was top in the Series points with two wins. Paul rode a textbook race with a good start and blistering pace that split the first and second gap wide open to 12mins 9secs and would have given him 3rd place in the days 4-Hour Solo Male 16-39 category.
Paul Ashby No. 822 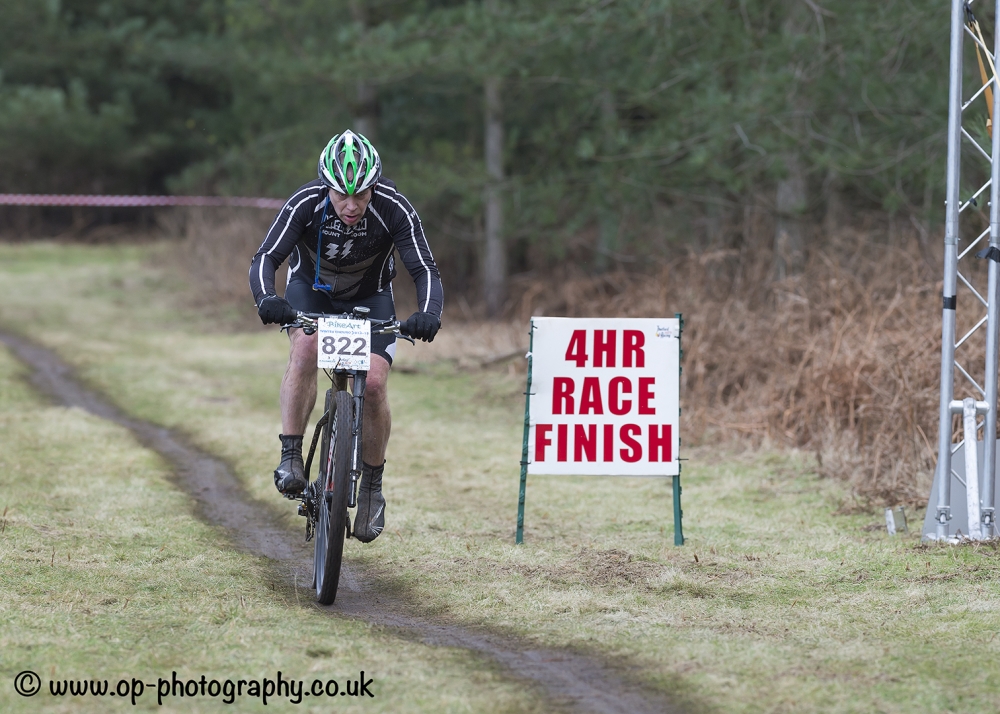 Over in the Fun Ride Male Category, leader, Zac Herrod seems to have done enough to secure the series with his second win and previous second place.
Harley Pell No. 982, also appears to have clinched the Fun Ride Female Category series by also winning Round III. 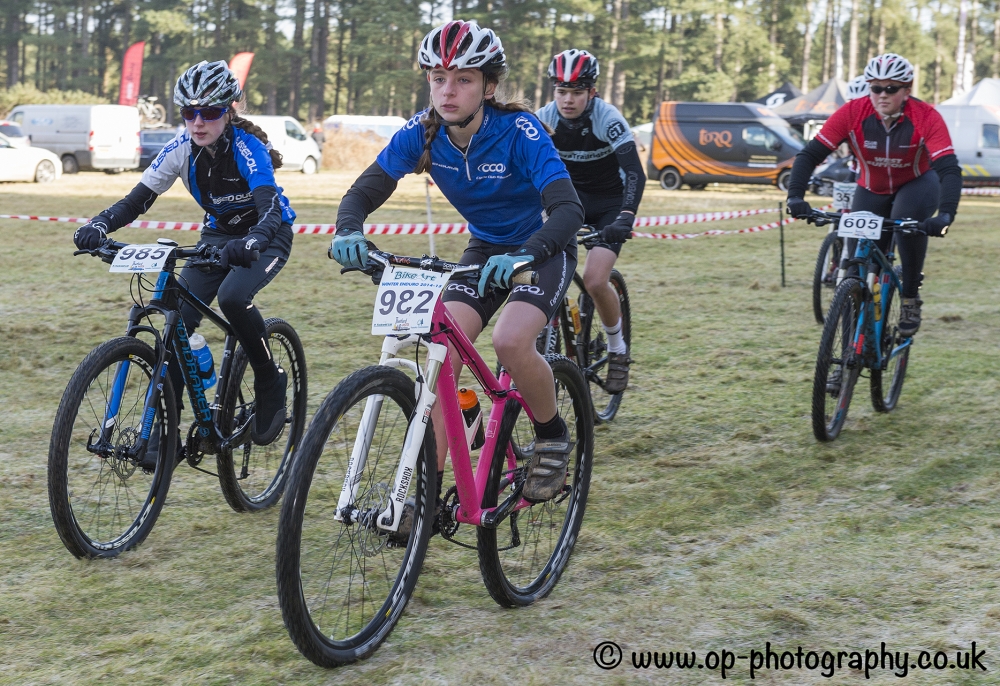 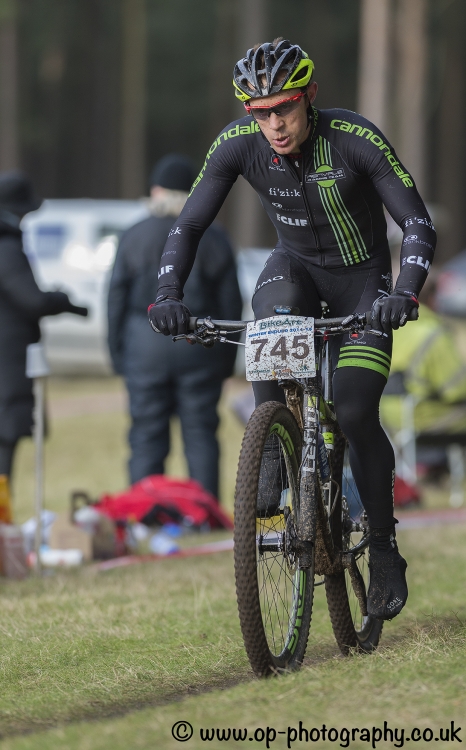 RyanAir?
Flying Ryan Henry No. 740 (Numplumz) takes off, at the entrance to Howes Pit.
He recorded second place in the 4-Hour Solo Male 16-39, round III 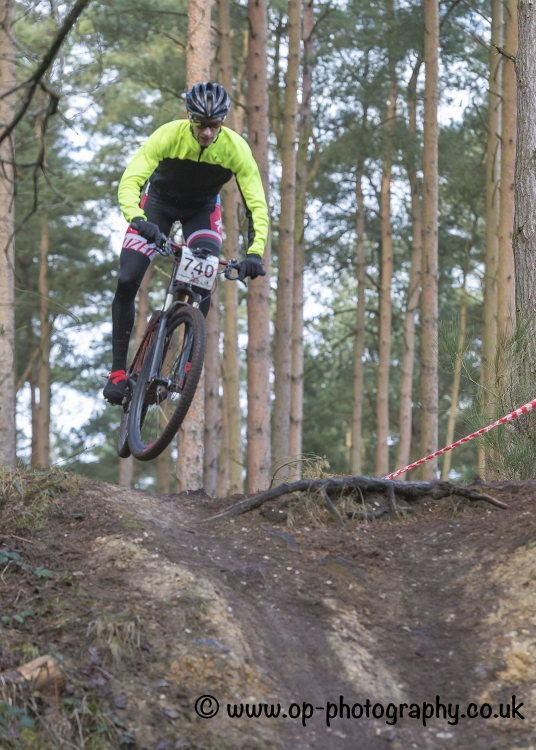 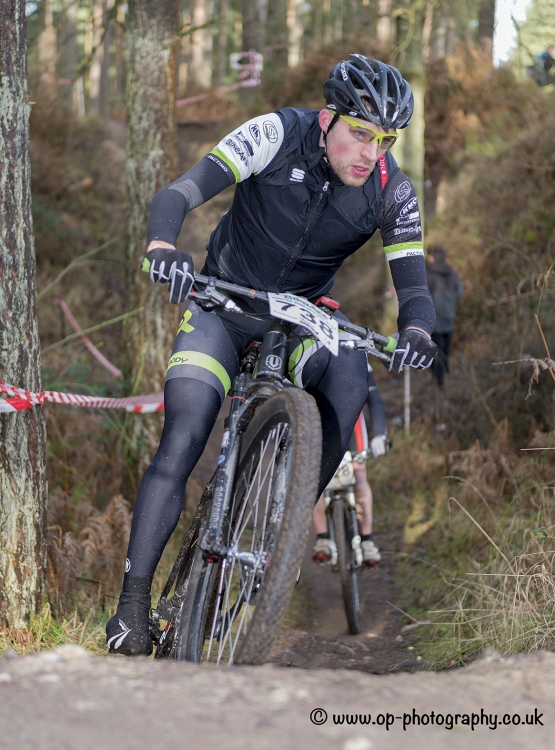 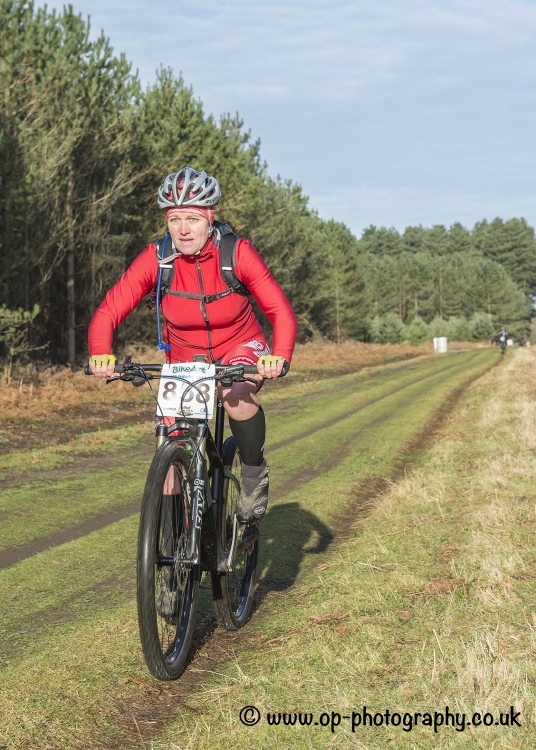 No.6 Howard Clarke takes a tumble going into Howes Pit but it did not stop him, he continued on to come in 76th in the 2hr Vet race. 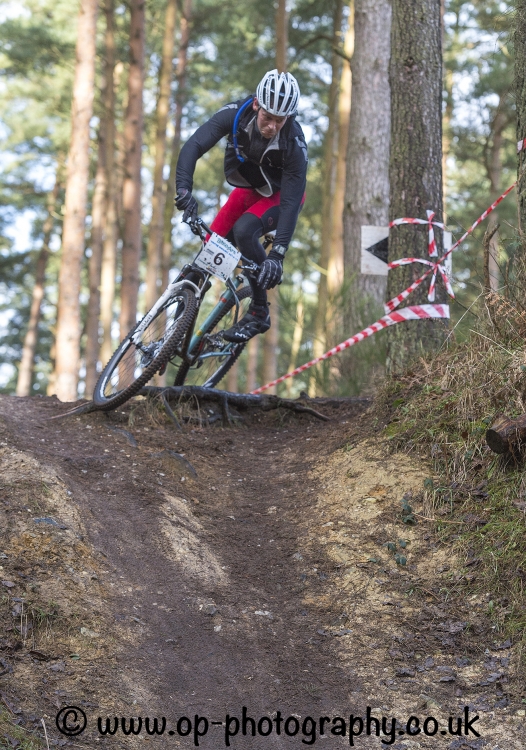 No.53 Paul Watson (West Suffolk Wheelers) 14th in the 2hr Vet, cranking his way out of Howes Pit followed by No. 309 James Murphy (Kings Lynn MTB/Berry Recruitment) who was 7th in the 2hr Male event. 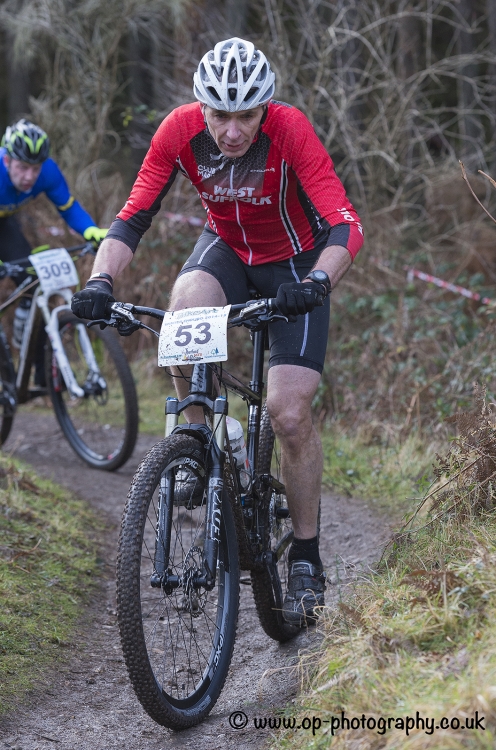