Sometimes plans sound good in your head.  Best talked about over dinner and then left for another day, "I'll do it next year".  Yet there are those rare events that as a mountain biker, you just can't put off doing.  10 under the Ben is the flagship and oldest event in the No Fuss organising stable and one I had never attempted, nor contemplated due the distance from my home in England.  Some less than gentle persuasion and my experience of prior "10" events meant that I couldn't miss out for another year.

Pre-riding on the Friday was made all the more realistic by the constant showers and my poor Superfly was looking rather less shiny after only one lap.  The course had some quite consistent fireroad climbs interspersed with the excellent witches trail singletrack and every Scottish XC racer's favourite, natural sections.  Natural sections are fabled in Scottish coursebuilding and are usually determined by needing to link two sections of fireroad down a steep bank.  I can only say thank goodness for that fireroad, because the freshly cut trail was the best of the lot.  Cheers to the Forestry Commission for looking the other way while we blunder 1000 mtb'ers off-piste through your forest!

I was fortunate to be entering the competitive pairs category with an experienced endurance competitor, Mark Smith of Angus Bike Chain.  Despite his youth Mark had a breakthrough year in 2009 finishing on the podium in 10hr and 24hr events despite only turning 19.  Indeed one of those results came after I abandoned him 12hrs into the 2009 Relentless 24, leaving him to solo to the finish and claim 2nd in pairs.  It's fair to say I had a debt to pay.

The format is simple, 10hrs, 10 mile lap, solo/pairs/team, as many laps as possible: GO!

Short straw drawn I was down for the much discussed "Le-mans" start, which in truth was a dash across the car park trying not to get your feet trodden on.  Fail number 1 for me.  I managed to settle down quite quickly into a nice group of 4 before that heart dropping sound of a puncture.  Fail number 2 for me.  Although spraying latex solution out of my rear tyre onto my opponents was a move Dastardly and Muttley would have been proud of.  Fortunately a quick gas and I was back on track for the handover.

Three things quickly became obvious:
1.     It was starting to rain.... a lot., but this was Scotland after all.
2.    The pair of Douglas Shearer and Jack Richards were flying and we were struggling to keep them in sight.
3.    I'm still yet to find a situation where 29inch wheels aren't an advantage.  At least I can rely on the Superfly rather than my legs.

We consoled ourselves with the notion that, "we were playing the long game" and, "it's early days yet".  However when you are saying these 8hrs into a 10hr event they stop sounding too convincing.  My recent diet of short XC races probably weren't helping calm the nerves as much as Mark's pre-event training which had included 105mile rides in between studying for university exams.

Nevertheless, cometh the hour and all that, our handover for my last lap (our team's penultimate) and the gap had closed to 1 minute which was remarkable as it had been over 5 for most of the day.  Jack Richards was to be my minute man and I have to admit to feeling a tinge of sympathy when I caught him.  By now the mud, grit and general mashing had limited me to the big ring and as I forced it up the first climb it was obvious that he had blown.  We've all been there and know how much it hurts especially when you are trying to win a race.  I didn't have time to dwell though as the competitive pairing of Keswick Bikes weren't far behind and are well known in Scotland for never letting up.  (Prior wins in Strathpuffer 24 tell a story).

Much to our delight Mark extended the lead by a further 2 minutes on the last lap to consolidate our victory in the male pairs and overall with 12 laps.  I'm not sure whether the complimentary Benromach whiskey or the knowledge that it was a race well ridden was the root cause of my light head.  Debt suitably repaid I would say.

After time for reflection I think the key thing which makes the 10's series different is the competitors it attracts (which in turn must be due to the organisation).  Everyone on course is up for a chat and a laugh and if you want to race, no-one ever has a problem getting out of the way as long as you say thanks.  A quote from Frazer at the start was, "Have fun, ride well and even fast if you want, but don't try too hard because the prizes are rubbish...."  If we're honest, very few people race bikes for the prizes and would instead rather savour the atmosphere.  Like so many other excellent mtb events in the UK, No Fuss have that bit dialled. 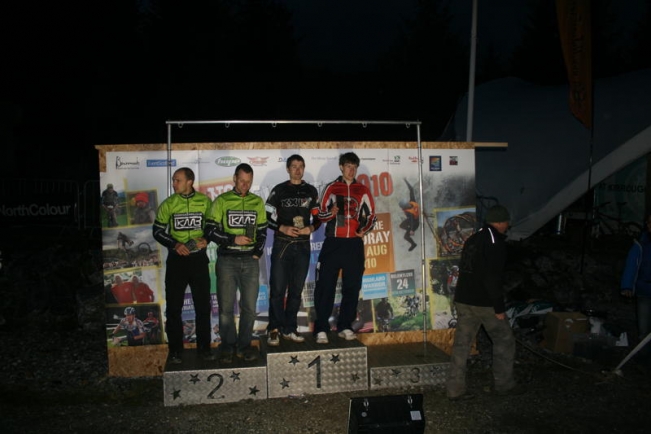 Check our www.nofussevents.co.uk for details of my prior favourite event, 10 @ Kirroughtree on 10th July.


Niall Frost
Many thanks to my sponsors; Gary Fisher, Exposure Lights, Accelerade and Xcracer.com  And finally to Mark as at least 50% of the team.

Thanks to Niall's dad for the pics