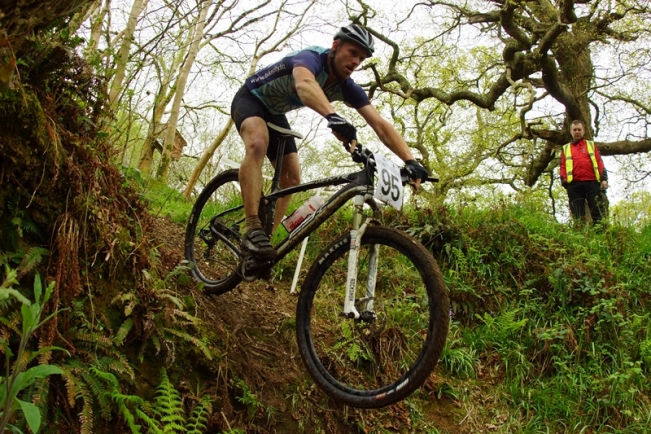 With only one round left of the Juice Lubes Summer Series, there's a lorra, lorra racing left to do. The new Juice Lubes Hot Laps has forged new friendships, fresh rivalries, has given different riders a shot at the title and has allowed racers the boast of coming within seconds of Dexter Hurlock's lap times.
The Track got us down with the kids, Wheal Maid showed us that there is life on Mars and the Juice Lubes Jam gave us an excuse to spend a weekend in Newnham Park. As long as Woodbury doesn't bring us foot rot again, it will be a job well done.
For those that missed it, here's Background Films' visual account of the South West Champs at Newnham.
We wanted a lap as far removed from the Wheal Maid mayhem as possible, and Saturday's Juice Lubes Jammers were the first to experience the full glory of the climbers' classic course. Six hours equals a lot of ascents of The Man Test, but luckily those of us in the timing tent saw the funny side.
The South West XC Championships resulted in some new faces taking the senior titles - Mondraker's Dexter Hurlock and Fully Sussed / Certini's Lucy Allan pulled on their Chapeau jerseys while hardy perennials Pete Dawe from Southfork and Certini's Kim Long took the veteran titles. It takes a lot to prise these team players out of their team strip, but the Caf� Cycling Jersey's nod to 'Where's Wally' is sure to be a summer head turner.
With The Bear Pit raising its head again, and us finally getting round to putting a b-line around it, the hot topic of conversation was; do you a) ride the a-line, b) ride the equally fast, but less fun b-line or c) run the a-line? Obviously 'c' is the wrongest of wrong answers and only included to shame those that took that option, but the correct answer is- whatever is the most FUN! Duh! Snapper Chick defied her injury and crutches to put herself in the midst of the action and her photos tell the tale of Bear Pit glories and walks of shame.
So now we rumble on to the grand finale on Woodbury Common. There's a special deal at Castle Brake campsite for competitors, which is within cycling distance of the race course. There's a bar and restaurant on site, and Saturday night is steak night for the Fred Flintstone diet fans.
There will be 80 series points up for grabs over the weekend, and most of the categories only have a handful of points separating the riders from eternal glory, so expect some dirty tricks and doping control. Will we see the first event where someone laps faster than Dexter? My money is on the youth boys to knock him off his perch, in the nicest possible way.
The course is a mixture of old and new - we are determined to keep The Nod Off in the race for the duration and there will be plenty of sketchy, Woodbury, pebbly fun to be had. In a change to the schedule, the Hot Laps will be held at the same place as the XC race - the campsite loop ticked the 'visible from the bar' box, but the course wasn't up to our exacting standards. Instead, we'll all be racing round 'Dog Poo Alley'. Lovely.
Sponsors Juice Lubes, Torq and Schwalbe are again providing the prizes and BJ's catering (ahem) will be keeping us fuelled throughout the day.  Follow the signs from Woodbury village.
Pre-entry is now closed but entry on the day available.

More on the JUICE LUBES South West XC Series 2013 Round 3: