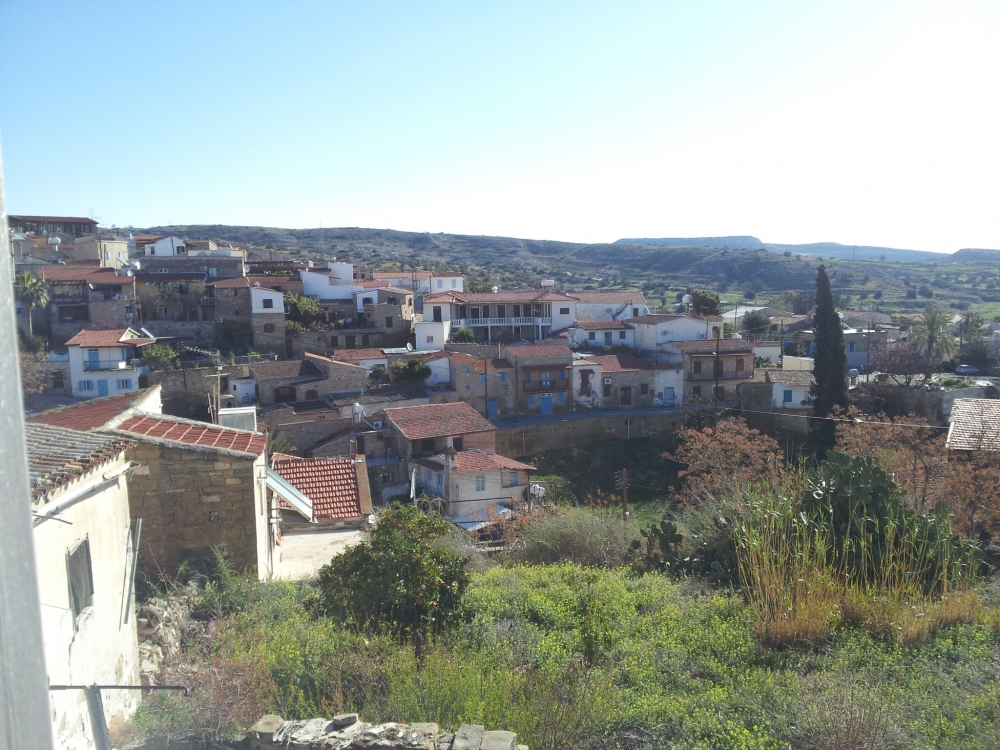 It’s hard to say much of note about a race that’s only 5.6km long, so to spare you a tiresome analysis of tire pressures, tread patters, dirt type, and competition, I won’t. Instead I want to tell you about the amazing place this race is being held in.

I last came to Cyprus almost exactly 20 years ago, on a family holiday with my parents. As a mere 12 year old, I was struck by two memories of my time here, I couldn’t believe how friendly and nice everyone in Cyprus seemed to be, combining all the best of the Mediterranean attitudes, and I also couldn’t believe how stark, frightening and incredibly beautiful mountain scenery could be. Fast forward two decades, and I’ve seen a lot of mountains, ridden a bike across passes between quite a few of them, but nowhere else have I ever experienced Cypriot hospitality!
This being so, it was perhaps no surprise to find that, on arriving at Larnaca airport, bike bags and slightly, ahem, oversize carry-on luggage in hand, our intrepid party of four (myself, Rachel Fenton & Maxine Filby of Trek-Coventry fame, and Sara Randle, Cycle Chilterns supremo) were met by two very friendly gents. Neo & Pantelis really saved our bacon, happy to help carry our bags and deal with the onerous task of getting our bikes, our luggage, and us to our apartments. They were somewhat amused by Rachel driving our enormous Nissan pickup, but she reliably informed us that she’d done if before on archaeological digs in Turkey, and none of us were keen to try instead!

I realise that with a forecast for several metres of snow to fall in the UK tomorrow (I may have read that on the Daily Mail website, so perhaps two flakes inside the M25 is more likely), it might be considered cruel to mention this, but the weather’s really rather nice here too. It’s currently hovering around 20 degrees during the daytime, enough to make climbing a sweaty affair, but not too hot. We haven’t had it all our way weather-wise, though. Yesterday, after pedalling up to Lefkara, where today’s prologue was held, we got caught in a biblical rainstorm (I’m pretty sure there was some hail in there too, time has dulled the pain!), and braved the 10km, 500m descent in the worst of it to get back to the apartment. Even then, it felt like summer rain though, wet, but not cold. Ah, bliss!

Today’s prologue had no such complications, and was run off in balmy, warm conditions. It was also like a who’s-who of world cup level mtb racing, it almost (*almost*, see title), got boring seeing the likes of Gunn-Rita Dahle, Jose Hermida, Marco Fontana pottering around the narrow, cobbled streets of the town. Sara and I cunningly entered masters, acting our age, not our shoe size, so we got our racing out of the way early to free up the afternoon for a nice lunch, a shandy, and supporting Rachel and Max who were racing the smaller-faster-scarier people’s race.
A crash and a puncture respectively made for a less than perfect start to the race for both of them, but it’s the best day on which to bury bad luck! Tomorrow we get to sample 50kms of the finest singletrack that the Lefkara region has to offer. And Sara and I now have virtual leader’s jerseys to defend, after discovering that we’re at the head of our respective (tiny) categories. Pressure’s on…
Click any of the images below for a larger view / slideshow 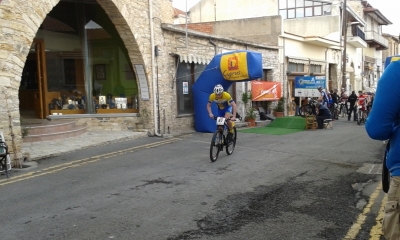 Lee Williams (Gateway Cycles) blasts off in the prologue. Sadly, a flat rear tyre 1km from the finish slowed down his warp speed towards the end. 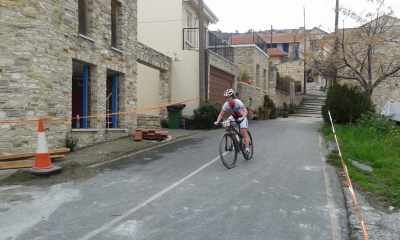 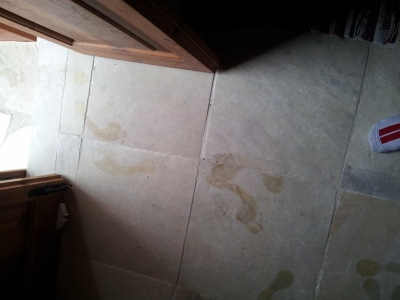 Can you tell where we walked after the rainstorm? 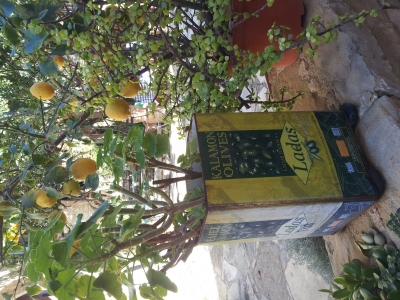 Lemons? In an olive oil can? Whyever not? 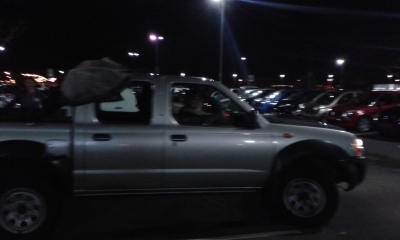 Rachel at the wheel of the monster truck. It smells of weed. And it guzzles fuel. But it's awesome!