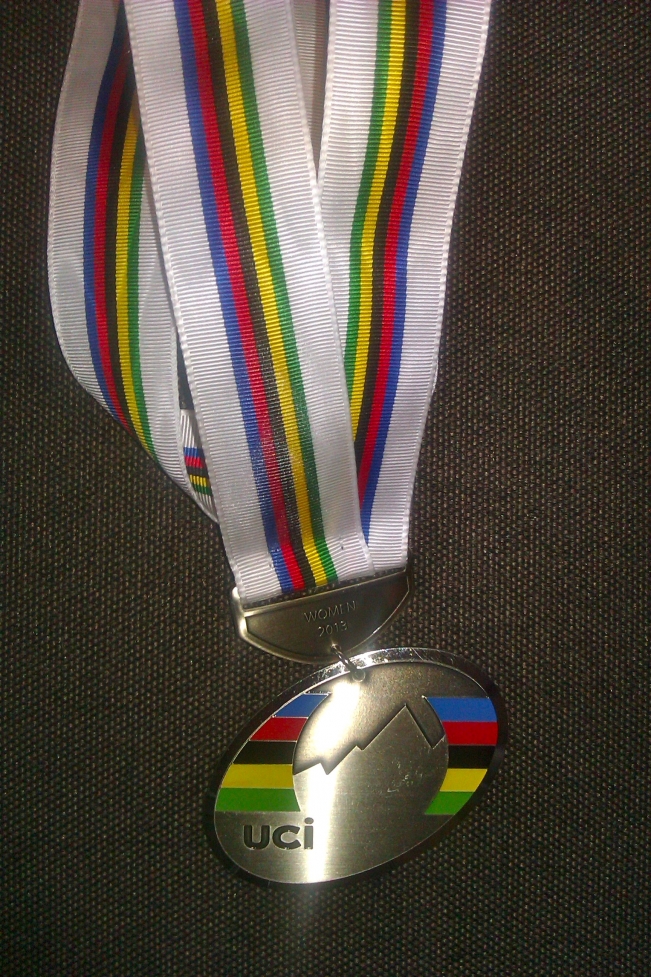 Silver at the World's

Silver at World's for Britain.

World Championship medals at endurance MTB disciplines don't come along very often so we are delighted to have Sally Bigham's exclusive account of her Silver Medal in Austria. In her own words...

The biggest goal of the year; other races pale into insignificance next to this one: the World Marathon Championships. Happening once a year adds to the pressure: one day, one chance. Everything must fall into place perfectly. Precision in both preparation and execution is key. Mistakes cannot be made.


The mission was to get a medal. A medal of any colour at the Worlds is a worthy accomplishment. Wanting something so badly is scary. The pressure was on, but it was purely self-inflicted. The preceding week set off a roller coaster of emotions fluctuating between confidence and self-belief to anxiety and self-doubt. Over the years I've come to recognise these familiar feelings (familiar to me and other athletes alike) and I'm gradually learning to spend more time focusing on all of the positives, including my ability. 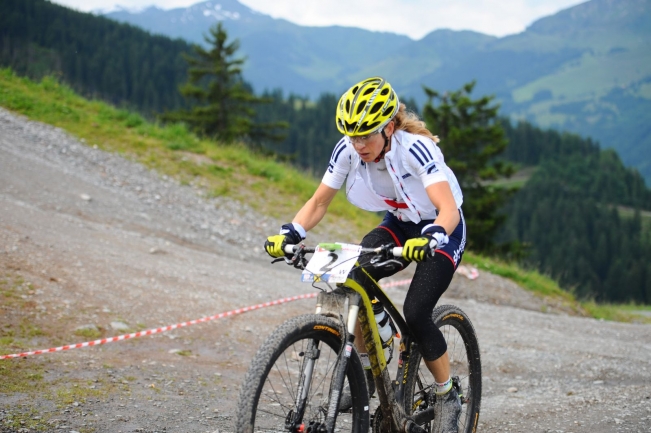 With 3700metres of climbing over 85k, Kitzalp was a great course for me and I knew that if everything went well then I had a real chance of a medal if not the title. One km before the first climb, the Norwegians launched an attacked rocketing Gunn-Rita Dahle Flesja into the first climb first. It was a smart move and it left me chasing (and wondering why British Cycling didn't offer the British Team the same level of management because, tactically, Britain was outsmarted). I felt good on the first climb and I was able to move up from 5th place as I pulled in Esther Suess, Annika Langvad and finally Blaza Klemencic. Entering the first downhill I was in second place and I retained this position throughout the rest of the race. 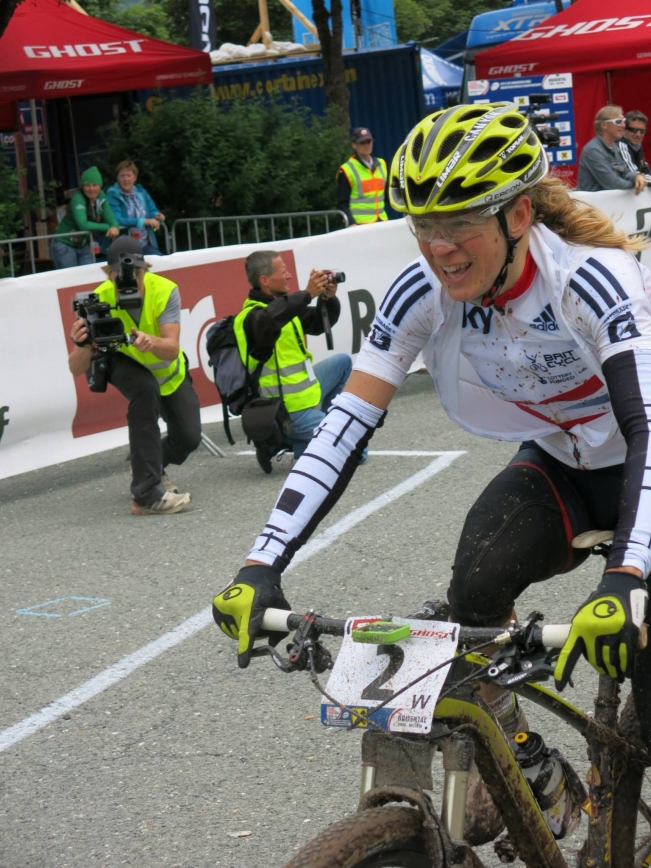 Several times I was able to close the gap to Gunn-Rita to within 30seconds, gaining time on the climbs as well as the first and second descents. Although I could see she was suffering and that I was riding faster, she was able to dig deep every time I got within reach and I wasn't able to bridge the gap completely. At the top of the last climb I was comfortably in the silver medal position and to me that was too important to jeopardise with a mistake on the long final descent to the finish, which after a week of rain was pretty technical. I decided to ride cautiously and secure my Silver medal. At times I really suffered on the descent and halfway down I was no longer able to brake; my arms were so fatigued and pumped that I wasn't able to modulate my breaking causing me to lose control at times! It was such a relief to enter the last few berms in the final metres. Crossing the finish line and taking my first World Championship medal was truly very special. 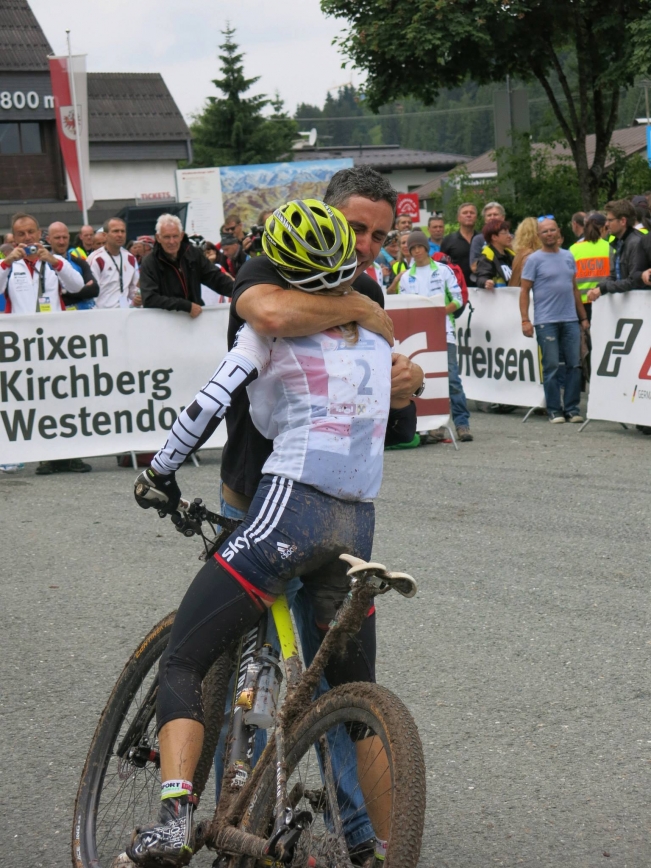 I am genuinely thrilled with Silver. At times I thought it was possible to win, but Gunn-Rita was very strong and tactically smart. To take silver to an 8 time World Champion is not something to be disappointed about. After giving 100% there are no regrets about my personal performance and the unrelenting support of my brilliant trade team (Topeak Ergon Racing Team) who have believed in me from the very beginning in 2009.

Standing on the podium as the youngest rider gives me the confidence to believe that one day I will pull on that rainbow jersey! 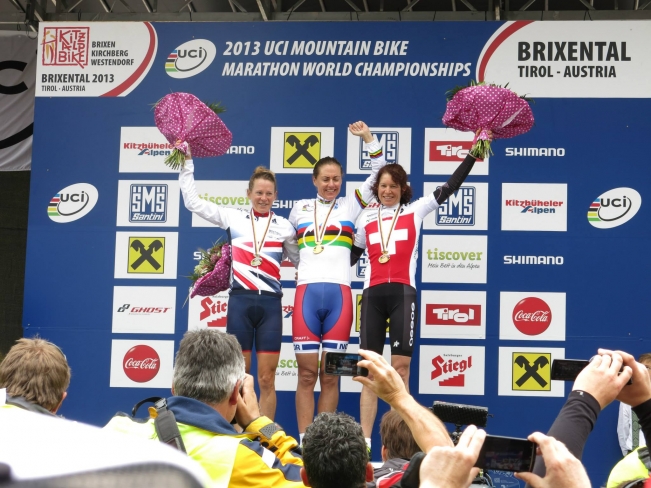 Congratulations to the other British riders on their performances on a really challenging course. Well done ladies! Congrats also go to Ben Thomas who finished a respectable 51st.

As always there are so many people and sponsors that have helped me to achieve this medal. I sincerely thank each and every one of them. There are of course all of our team sponsors, including Canyon who worked really hard to develop a Grand Canyon CF SLX 29er small enough for me. This bike has genuinely contributed to my performances this year. My list of personal sponsors is small because I only work with brands and products that I truly believe in: TORQ nutrition; Compressport; Elete electrolytes; Northwave shoes; and Maloja. One person who deserves a special mention is David Bailey who has played a significant role in helping me to achieve the physical condition needed to race at this level. Thank you David for setting me such grueling training programmes!


Congratulations to Sally from Xcracer, Senior World Championship medals are few and far between and a quick trawl of the history books (and a nudge from Jenny Copnall) shows that this is actually our first Women's Senior medal...ever!.