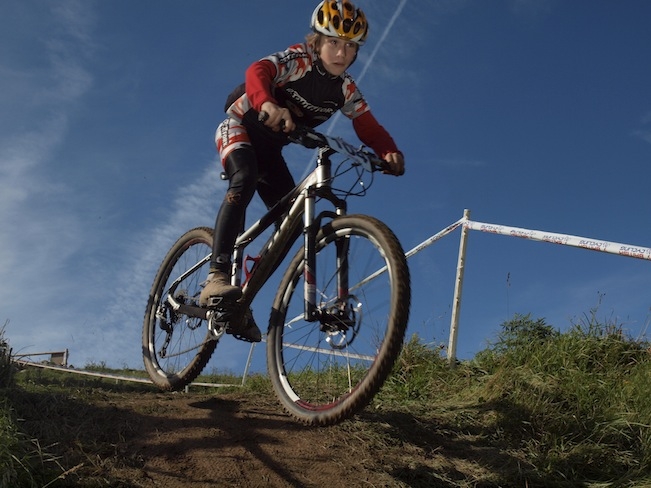 Youth Inter-Regionals Day 2 - once more into the breach

A good night sleep, a belly full of Holiday Inn brekky and it is turbo trainers at dawn at Hadleigh. The kids are in surprisingly good shape after a night of room hopping, lost keys and American Pie reruns but the adults are feeling the strain. Luckily we are now post-pasta and mid-cider, the kids are locked in the broom cupboard and we are feeling lots better.
Day two kicked off with the dirt crit. With the amount of heats, semis and finals, the kids were permanently warming up, cooling down or racing. But time was still found for wearing comedy hats, eating rocky road and blatant flirting. You know who you are.
The crit races were 5 Ľ laps (?!) of the start / finish loop at Hadleigh. Designed for fast, tight racing, it was soon apparent that while a 5 minute race doesn't sound long, when you are blowing it out of your a**e, it may as well be 5 hours. Add into the equation the fact that you have to come past your bellowing 'support' crew 5 times, and tempers occasionally became a bit frayed. 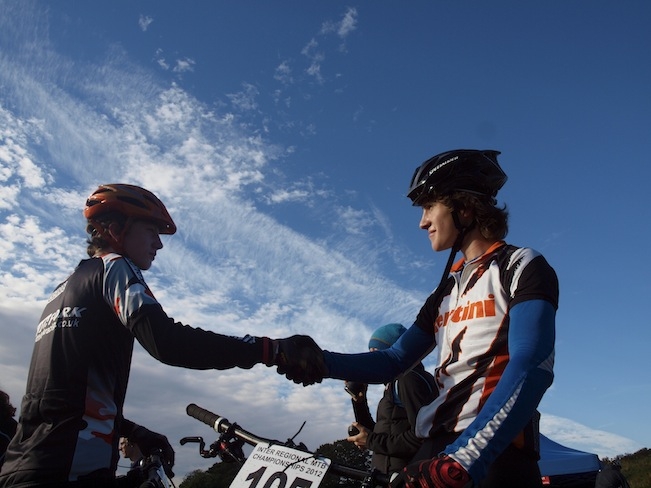 Outstanding performance for the south west was Fin Clay, who got caught up in a stack at the start of his heat, but redeemed himself by gapping the field by 3 bike lengths on every downhill in the semis, pootled round the rest of the lap, then gapped the field again. Shame about his dreadful chicken hat. Lucy got her race face on once we persuaded her that she is a beast of a girl and needs to stick it in a bigger gear. Beauty and the beast - all in one person.
All the time, the booming soundtrack and commentary left the elder-folk praying for a nice cup of tea and a bit of James Morrisson.
After a couple of hours off, when all the young-guns had a bit of a nap, the old-uns tried to fathom out the latest last minute change to the rules or programme, it was time for the hill climb. Again, when you are at the top of the hill looking down, it doesn't look like much of a hill. At the bottom, however, it looked like someone needed to put a flag in the top of the climb, claiming it for England and her majesty. The only way we could persuade the kids to leave the EZ up was to remind them that they only had to do two more efforts before they could take off their cycling shoes for the day; just two more horrendously painful efforts.
Disaster struck again when Lucy hit the deck after progressing to the 'A' final. Back on her bike, she got a bit too aggressive and again crashed in a bold overtaking manoeuvre. Patsy took a superb 7th place in her 'B' final, despite being 4 years younger than most of her rivals, having flat pedals and legs that were last seen hanging out of a nest. It would appear that she was fairly pleased with the result, as she has been talking for England ever since. Hope she isn't drug tested.
Jack kept his powder dry for the whole day and let it all out in his last ride. In the 'B' final of the hill climb he went from the third row of the grid to win the race by a country mile. Like Highlander, he summoned up his whole life force and released it in one glorious burst. Joe Barker had less life force to summon and expired halfway up the hill. "Mighty Mouse" the commentator called him - damn right too.
If you judge the success of the day by the volume of chat in the van on the way back to the hotel, I think we won the World Cup today. The South West team are bonding into a formidable fighting force, soon to be seen on a Facebook page near you.