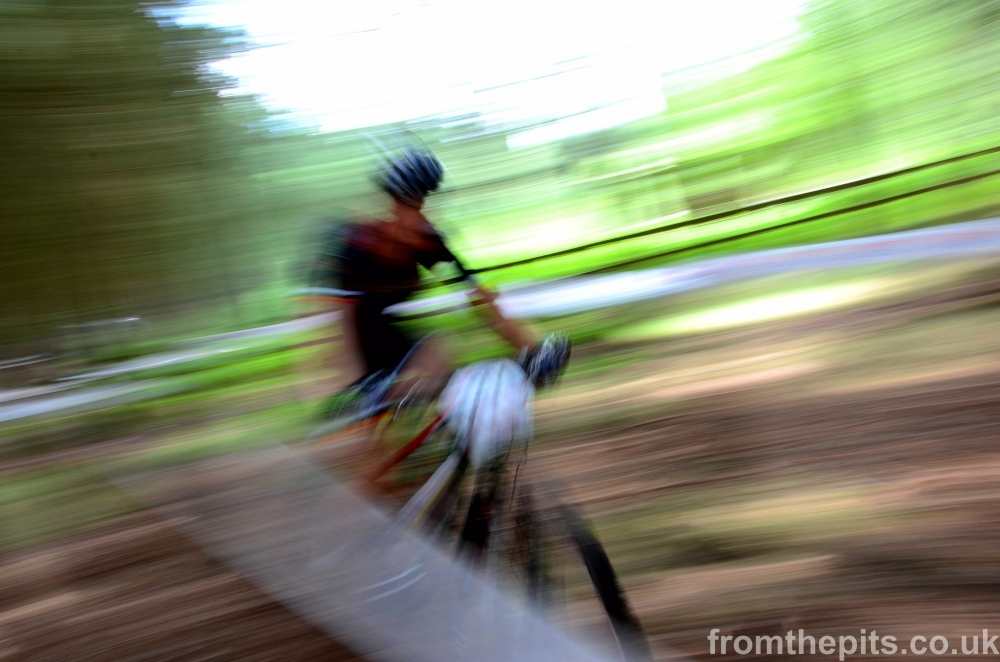 Sherwood Pines greeted us with warm weather this year, but initial analysis of the course was almost as cold as last year's snow.

The 5km track twisted tightly through the trees with little undulation or technicality. Many of the top elite racers spent Saturday evening trying in vain to determine what would split the race and where they might be able to put the power down and attack. Of course, there is always speculation and it is often the case that a course races better than it rides. Indeed, many of the Sport, Open and Fun competitors wore broad grins and chatted happily about the track as they relaxed in the sunshine, post-race. 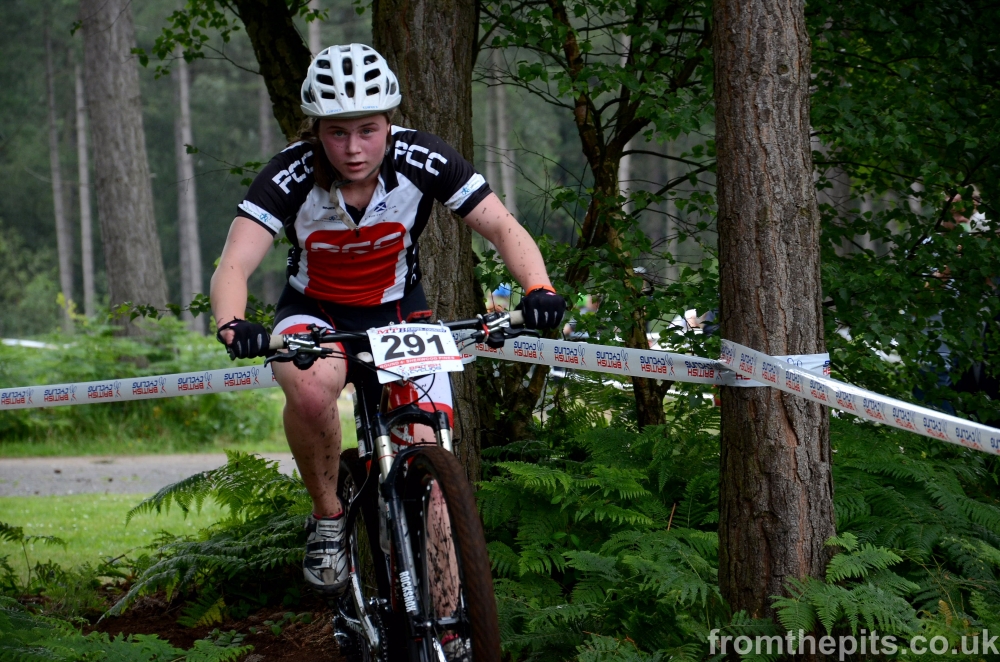 The Junior races were dominated by Team Thompson Cycles' power couple, Isla Short and Jack Ravenscroft! For Short it was a fourth victory, sewing up her series title, whereas for Ravenscroft it was a return to form following a season off the National podium.
Short had hoped to secure a win in the series at Sherwood but was aware that the course didn't suit her strengths. Despite this, she built a lead of one minute and thirty five seconds over the four laps and was once again riding among the podium places in the Elite race. After three third place finishes, Evie Richards was able to go one better at Round Four and also reduce the winning margin of Short. Richards had Sarah Lomas for company in the first half of the race, but as Lomas began to fade on lap three, Richards kept the same pace and was able to gain over a minute on third placed Lomas by the finish.
Ravenscroft had a tougher battle on his hands, the favour of the fight tipping tentatively between him and Mark Mcguire. Ravenscroft would force a small advantage, only for Mcguire to chase back onto his wheel. Behind them, Billy Harding led the chase with Will Taylor and Robert Rogers. Rogers looked to have cracked on the second lap but fought back, and then Taylor dropped off the pace before a storming last lap saw him catch Rogers again. Paddy Atkinson, meanwhile, was gradually making his way forward and by the end of the race was fighting it out in the sprint for fourth.
Back at the front, first and second was also decided in a sprint finish. Ravenscroft took it by a mere second, whilst Mcguire took much more than that to catch his breath and recover. There was definitely nothing left in the tank after that race! Harding had a slow last lap but he had done enough to secure third place, a great result after a tough first half of the season. Rogers won the sprint for fourth ahead of Taylor and Atkinson. 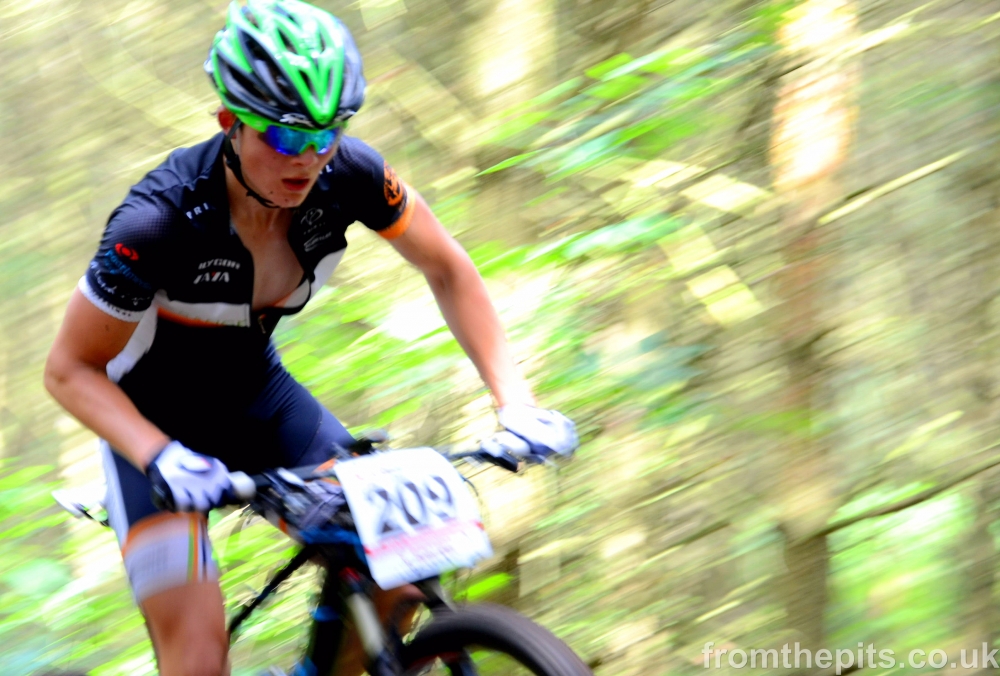 The Youth categories got Sunday's racing off to an exciting start.
In the Girls' race a lead group of three formed early on with series leader, Emily Wadsworth, driving the pace. In her wheel was Ella Connelly, and Sophie Wright was just about in contact as they crossed the start/finish after lap one of three. There was little to tell between them, but with Wadsworth a proven winner she was the favourite. Lap two did little to determine the outcome, except that Wright was now well and truly in the running. As the three climbed up into the arena for the final time and snaked through the trees at the very top end of the course, Wadsworth was losing contact with her rivals. Instead it was Connelly who led the charge, with Wright hanging onto her wheel. As the two riders exited the north shore section, Connelly had the power to pull away from Wright and take the victory. Wright stepped onto the podium for the second consecutive time and Wadsworth had to settle for third this time around.
The Boy's race looked as though it would be a very hotly contested affair as a long string of riders entered the arena after their opening lap. Chris Rothwell led a lead group of William Gascoyne, Matthew Fratesi and Harry Lewis down the finish straight, and just a couple of seconds later came another group including Miles Worner and Joe Barnwell, among others. Soon after, Gascoyne made his move and the group splintered. Fratesi and Rothwell were best of the rest, keeping each other on their toes right until the final metres where Rothwell clawed second place by the tread of his tyres. Gacoyne took a comfortable win, finally on the top step of the podium after twice being second this year.

Megan James, Kim Baptista and Poppy Wildman have all been on the podium at this year's National Series, but at Sherwood these leading Juvenile Girls were closer than ever. James' had only a slim advantage over Baptista after lap one, and a few seconds further back Wildman had Lucy Horrocks for company. James capitalised on a mistake by Baptista at the north shore on the second and final lap and powered her way around the final bends and onto another victory. Baptista had to be quick to get going again because Wildman had dropped Horrocks and was hot on her heals. Despite her best efforts, Wildman was two seconds shy of second place, and only seven seconds down on the win.
In the Juvenile Boys' race Harry Birchill set the pace from the start and went on to take the win by forty four seconds. Birchill had Rogers on his tail for the opening lap, but a super speedy second lap saw him pull away from the competition and establish a solid lead. Rogers, on the other hand, had a slow second lap which allowed Sean Flynn and Tim Shoreman into the podium positions. Rogers fought back but Shoreman got the better of him in the sprint for third. Flynn was safe in second. 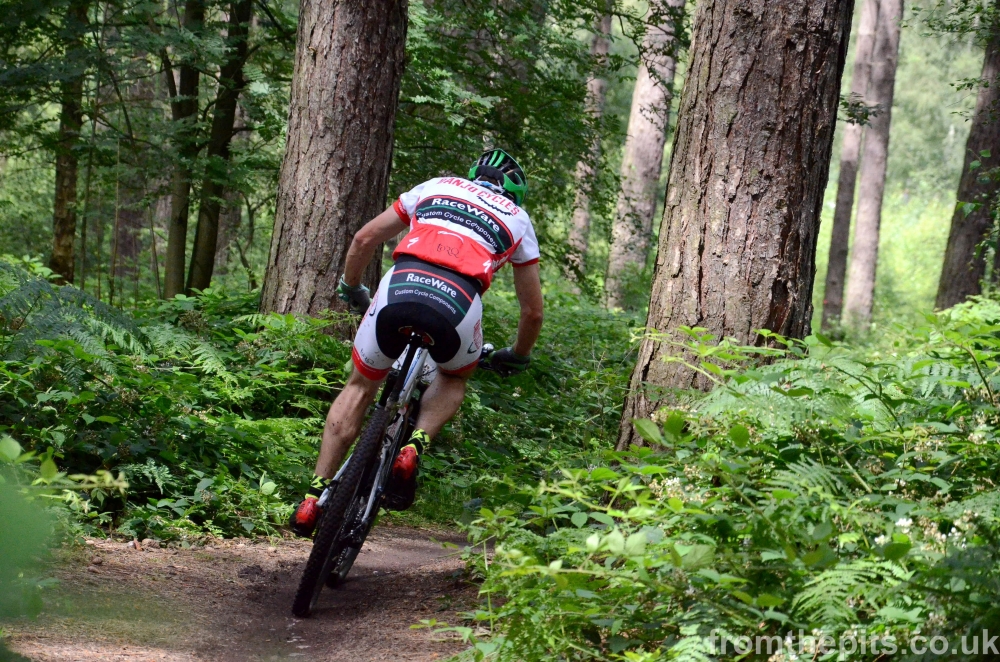 For the Expert Women it was business as usual for Hollie Bettles who continued her winning streak and wrapped up the series title. It didn't look to be plain sailing for her though, a few shakes of the head signalling that she wasn't having the best of races. Despite this, Bettles took a comfortable win from Fern Henry in second and Mel Paddington in third.

The Expert Men's category has also seen seen an unbeaten record this year, with Phillip Pearce in control once again at Sherwood. Sherwood's tight, twisty trails suited Pearce and he felt happy and at home with the course. He led from the start and eventually amassed over a minute lead on second placed James Hyde. Hyde had Jon Cruickshank for company on the first lap but thereafter found himself alone in second position. Cruikshank, too, was safe in third spot. With a fourth win in the series, Pearce has impressively secured the series title in his first year of competitive racing.

Andrew Taylor, Paul Lloyd and Thomas Fowler put on an exciting show in the Master's race. Fowler was off the back of the leading duo after lap one but chased back on and the three then rode in close formation for the remaining five laps. The only noticeable difference between the riders came on the final charge for the line where Taylor was able to put a flash of daylight between himself and Lloyd in second place, whilst Fowler was only another five seconds behind in third. 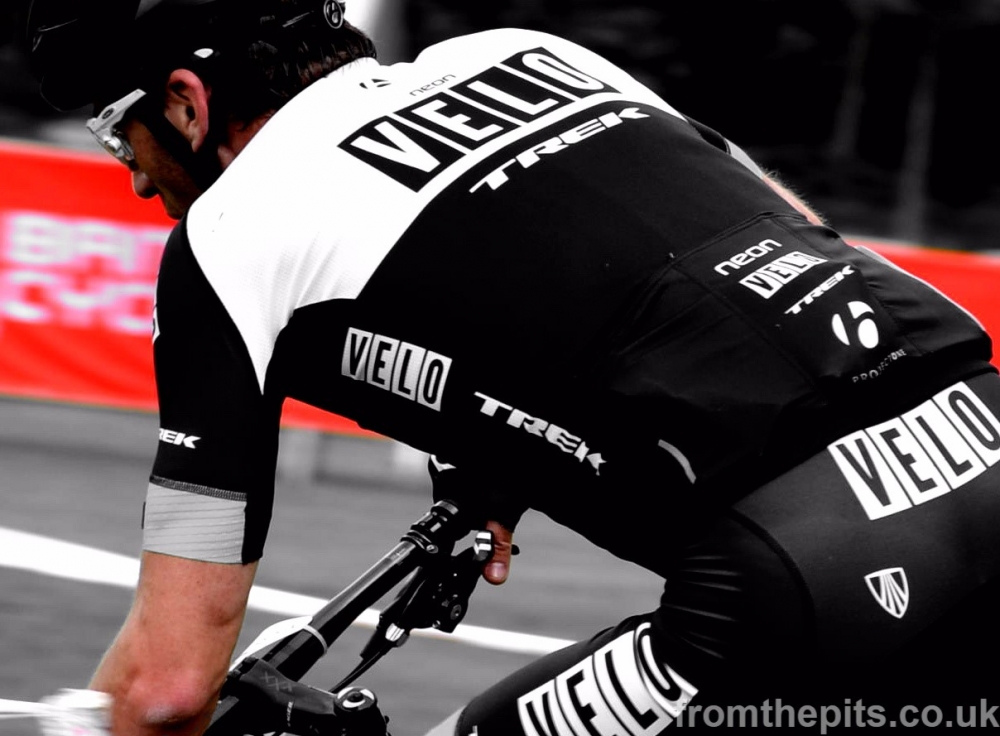 The Veteran Women's race was won in commanding style again by Alison Holmes. Riding with the leading Expert woman for much of the race, Holmes kept the pressure on and at the end of five laps took the victory by over two minutes. Caroline Goward had Helen MacGregor in her sights in the early stages of the race but MacGregor gradually pulled away to take second spot, and Goward finished safely in third.
The top three places were closely fought in the Veteran Men's category, as they had been a number of times earlier in the day. However, this time the lead group was five strong until the penultimate lap shook up the fight for the podium. Paul Hopkins, Sam Humphrey and Ian Taylor were fastest over the opening lap, but were soon joined by Lewis King and Marc Chamberlain. Laps two to four were a lesson in consistency, and then the pace was upped and the pressure cracked Humphrey and Hopkins. Chamberlain was able to eke out a few seconds over his rivals going into the final lap but he was caught and overcome by King in the closing stages. King won by four seconds, with Chamberlain out-sprinting Taylor for second. 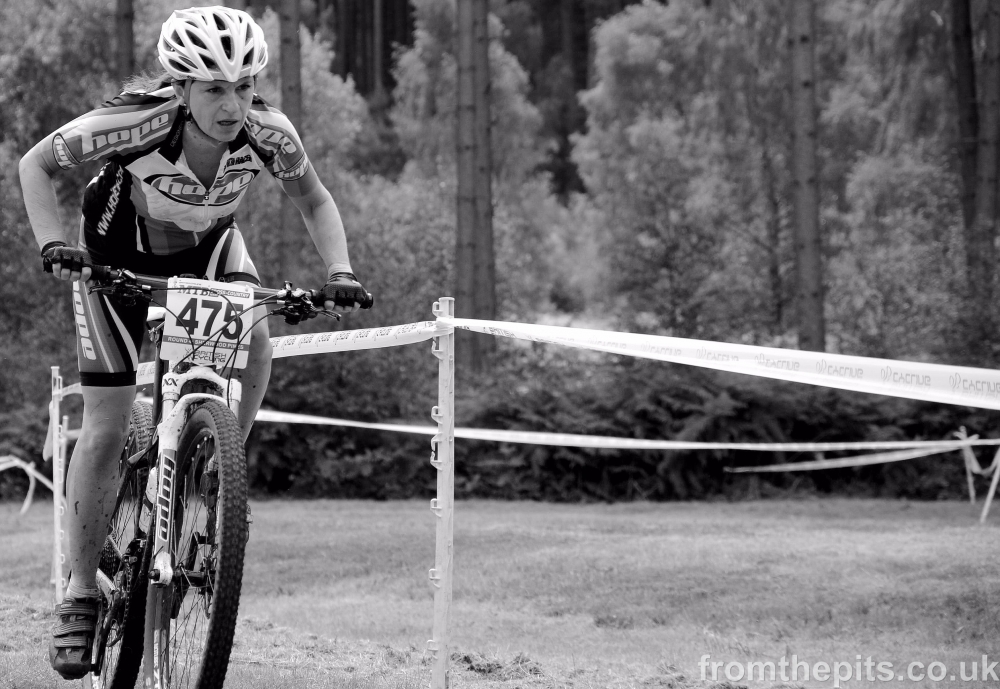 Elizabeth Clayton's unbeaten record looked under no threat in the Grand Veteran Women's race. She managed to establish a staggering eight minute lead in four laps, always looking strong and never complacent. Alison Linnell and Penny Allan finished in second and third place respectively.
Though not eight minutes, Marc Chadbourne's win the in the Grand Veteran Men's race was still commanding. Peter Turnball was the only rider to stick with the pace of Chadbourne on the opening lap, but he slipped backwards thereafter. Grant Johnson was the man who could most closely match Chadbourne's pace, and he gradually settled into second position. Kevin Holloway, Stephen Jones and Bruce Rollinson were all up in the mix, but it was the slow-starting Ian Wright who came strong in the end and took the final step on the podium.
The series-long battle between Super Veteran's Ian Petherbridge and Lynn Lines continued at Round Four. Petherbridge made his intentions clear from the beginning with a flying first lap, and then continued in fine form onto a win of almost two minutes. Lines was second and Tony Wilkins took third spot. 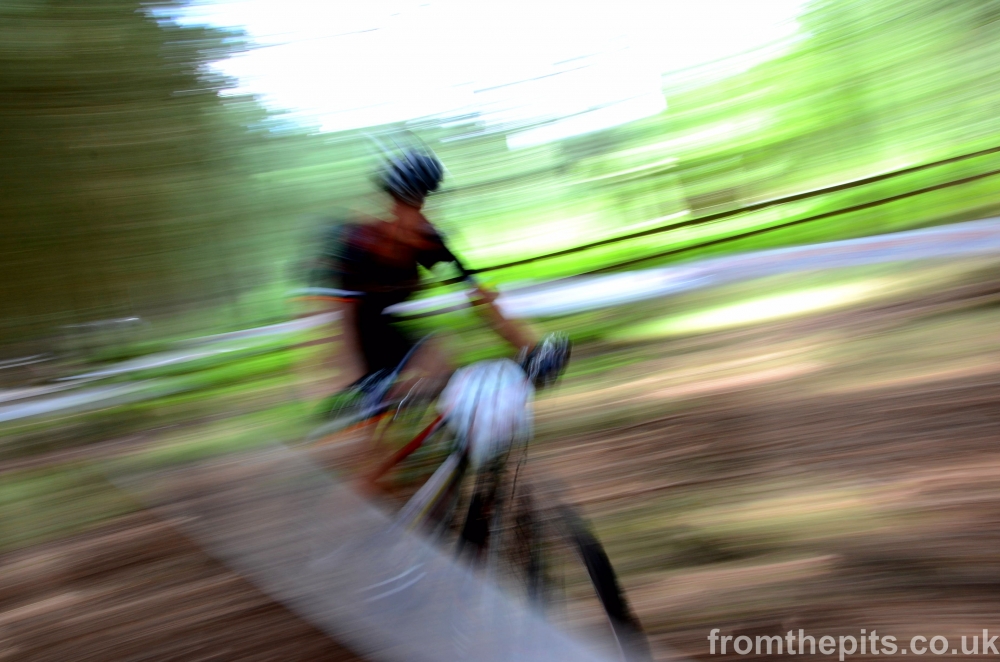 On Saturday the Sport Men's race was led, as we have become accustomed to, by the Army. Ryan Perry and James Spilsbury were first and second, separated by a single second after five consistent laps together. Peter Moore soon established himself in third position and defended his position to the end.
Linda Young, Dani Humphrey and Amy Worley took podium honours in the Open Female race, whilst the Male race was won by Pete Harris (masquerading as a non Grand Vet!) from Jason Miles and Rob Grimes. Jacqueline Simcock and Michael Shuldham were winners in the Fun category.
Whilst a number of categories have had their series winners confirmed at Sherwood, there is no slowing down now as the domestic race calendar reaches its height this coming weekend in Hopton for the National Championships.