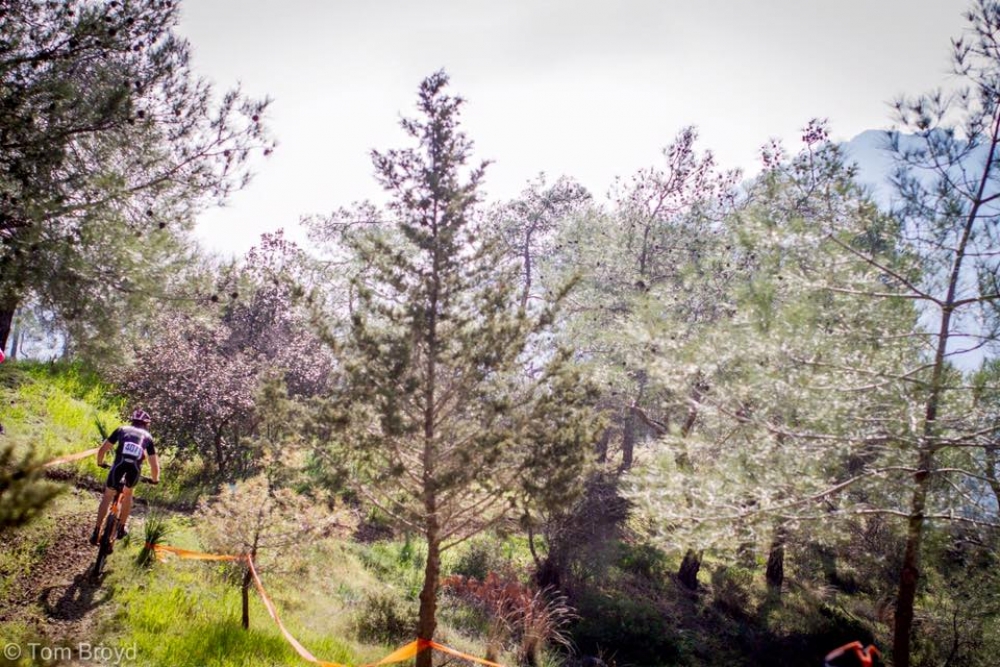 The year of adventures continues and I soon found myself boarding the plane to Cyprus for another race and this time it was the Sunshine Cup.The Cyprus Sunshine Cup is a 4 day stage race and the format is as follows, Stage 1 is a short 3.9km prologue through the town of Lefkara. Stages 2 & 3 are point to point races, coming in at 48.2km & 50.7km long respectively and Stage 4 is a cross country format with each lap being 5.9km.

You never know who you’re going to bump into on your travels and it was nice to meet Phil Pearce at the airport who was out here racing too. Unbeknown to us at the time we would be sharing the same taxi ride everyday as neither of us had hired a car and it was the easiest way of getting around. We were joined by two American’s and a rider from Switzerland which made the travels everywhere a right giggle and many laughs were had along the way. In a strange way it took away the pressures of racing and it made for a relaxed atmosphere, so it felt like more of a holiday than a bike race.

Here we go then, time to wake up the legs and feel the lungs burn for the short effort. This stage was cross between a hill climb and an urban downhill race. For me the climb was a means to an end as I was far more interested in racing around the streets than killing myself riding up a hill. This was the stage I enjoyed the most as I couldn’t get enough of it the day before when we got the chance to practice.


From the start ramp it was a short climb up the road and you dived off into a side street and down a set of steps with a couple of sharp corners at the bottom where the climb began. The climb was mostly road with a short section through someone’s back garden but I’m sure they didn’t mind. The climb was very steep in places and it took us to the highest point of the town with wonderful views but there was no time to take this in as the clock was ticking as you shot straight off the top into a steep gravel downhill which is where I caught my 1 minute man, not the ideal spot but nothing could be done. I seized my opportunity to get past as quickly as possible and made my way down to the street section. This was my favourite part by far, you were greeted by steep sets of steps, some to roll down and others to jump off. This was followed by a race through the streets as you raced past people’s front doors and through the tight streets which at times weren’t much wider than your bike but made it all the more entertaining.

The street section was fast and just as hard as the climb, concentration was required to make the tight corners and not connect with a wall. It was during this section I caught another rider and soon made my way past. 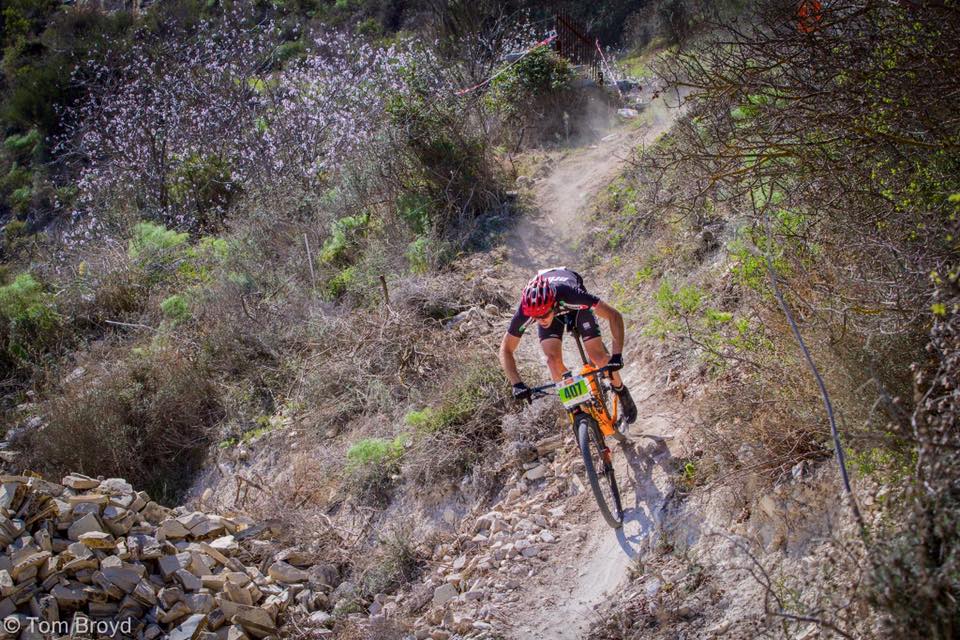 Having started at one minute intervals it was a nice feeling knowing I had made up 2 minutes on my competitors in such a short space of time and I crossed the line in 2nd place, a good start to the race!

Stage 2 had a neutralised start was quite nice as it gave a chance for the legs to warm up and for the riders to be safely guided out of the village. The racers followed a car out of the town for a couple of miles as it took you onto a long road climb which marked the beginning of the stage.I guess it would go pretty crazy once the car pulled off and I wasn’t wrong, the speed was high, groups quickly formed as riders got dropped and everyone started their attacks. I went with the first group for a bit but the pace was too high and I decided to settle into my own rhythm and not blow up and risk my entire race.The event organisers here like there climbs as the first hour of the race was uphill, the climbs were either on the road or dirt tracks, nothing particularly challenging or interesting which made the suffering all the more as there was nothing to distract you. The climb soon passed, much to the relief of the lungs and the riders were greeted with some great decants which were some of the best on the island. As I hadn’t practiced the course I had no idea where I was going and ended up hitting everything blind which made it all the more exciting as there was little room for error. A lot of the descents transverse along the sides of a mountain and some of the corners were mega tight, one wrong move and you were off the side of a mountain.The final part of the stage wasn’t the most enjoyable as they saved the hardest to last. The final 3km was a brutal climb which sapped any energy you had left in the tank as it seemed to go on for ever. At this point I had certainly had enough and I just wanted the stage to be over but it felt like the longest 3km of my life. The climb took you back into the village of Lefkara which is where the race begun and it was a quick dash around the streets again to cross the line in 3rd place.

I had been warned that this stage was brutal and it followed much of the same course as yesterday but in reverse so the fire road descents turned into a 1hr 40 min climb, ouch! The start format was the same as yesterday. As per yesterday’s stage, once the car pulled off the attacks started and riders were soon spread out and you started the long climb of the day. The first few km of the climb went well but I let the lead riders go and settled into my own pace. It’s hard seeing riders come past you knowing that as long as all goes to plan you should catch them back up at some point. With the hill being so long it would have been too easy to empty the legs before the top so I stuck to my game plan and sure enough, the riders that had previously over taken me I had now caught and by the time I hit the top I was where I wanted to be. The reward from the climb was great and it was time for another long descent much the same as yesterday, tight and technical but with some jumps and drops added in for that feel good factor.I knew I would have lost some time to the leaders on the hill as there were some strong climbers in the group but I played to my strengths and made up as much time as I could on the descents to try and keep within a reasonable time from them and to build a gap from the riders behind. Unfortunately the descents weren’t long enough and I couldn’t catch them again but after 2hr 30 min of racing I was only a few minutes behind, crossing the line in 3rd place again.

The final stage and a format that is familiar to most of us, xco.

The course can be best described as a typical Gorrick race, short sharp climbs, plenty of fast flowing singletrack with some really steep technical descents. About half way round the course passed through the starting arena which made the laps feel like they were going quicker than what they were.

To help spread the riders out there was a short start loop which led you into the main course. The start would be important as parts of the singletrack was quite long which could either work in your favour or not.

Overall I was placed 3rd and I knew the time gap to 4th was just under 4 minutes so I had time to play with just in case the worse was to happen and a similar gap to 2nd place. It would be hard to make any ground up today but I certainly didn’t want to lose any. My legs felt good prior to the start, so it was just a case of how everyone else was feeling.

No matter how well I do or do not warm up the pace at the beginning always comes as a shock to the body but there was no time to wimp out today. My start was good and I was in the leading pack up the first climb and kept a solid pace to the top. I made up some time on the riders around me on the technical sections and just kept my head down for the next 40 minutes. I knew I had made a gap on some of the riders around me in the overall which kept me motivated to keep on pushing in the small hope that I was making some time up on second position. The race was soon over and it felt weird to race for such a short length of time, but it was nice knowing I was finished for the day and I could enjoy watching everyone else race later on that afternoon.

I crossed the line in 2nd position and watched the clock to see if I had gained a place overall. In the end it wasn’t enough, I made up 2 minutes on second place but not enough to steal it from him overall.

After 4 days of racing I finished 3rd overall with some consistent results which bought me home a medal every day. 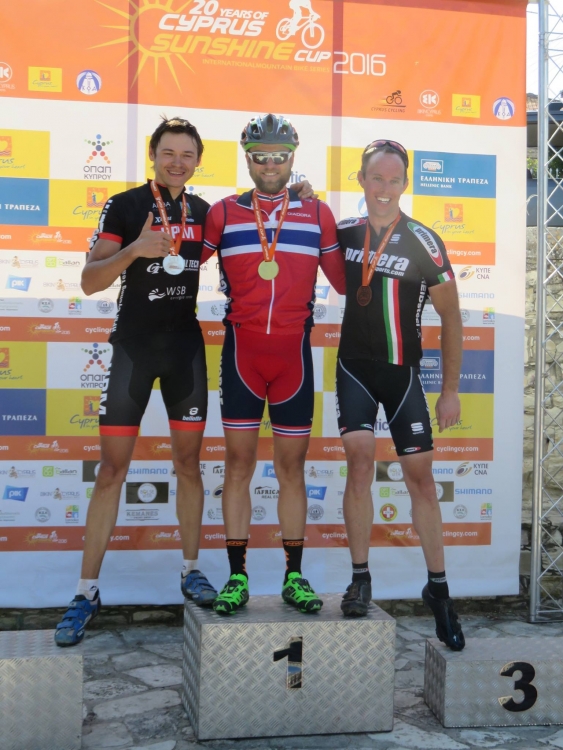 For those thinking about entering next year, I would say the Sunshine Cup is a well organised event and worth the trip to have a break from the UK. The trails are certainly a mixture with more open fire roads than what we’re used to in the UK, but the descents are longer and faster which is a bonus.

The bug has well and truly bitten so it’s time to plan the next stage race…………….in the sun.

If anyone is looking for a partner for any stage races then let me know as I may well be interested.