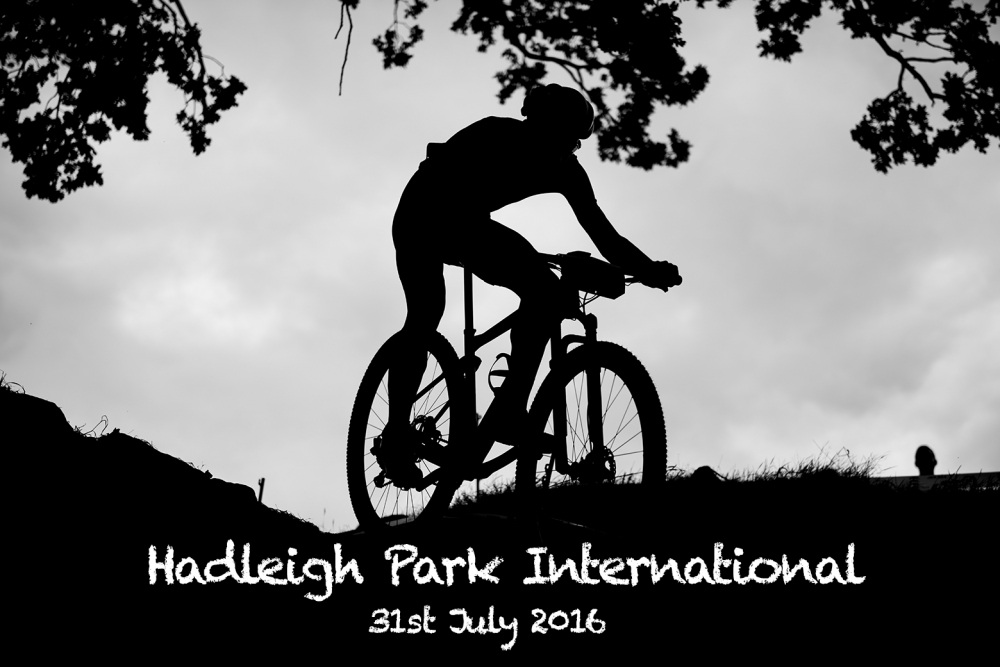 Brilliant sunshine today but it was the stars that shone brightest!

Report by
Anna Buick
Hadleigh Park International
Jolanda Neff and Nino Schurter were victorious in the Elite races, demonstrating just why they are heading to Rio as favourites for Olympic glory.

In the Women’s race Jolanda was joined by many other cross-country stars, including her Swiss compatriots Linda Indergand and Kathrin Stirnemann. Frenchwomen and last year’s World Champion, Pauline Ferrand-Prevot, and Australian Champion, Bec Henderson were among other big-name starters. U23 World Champion Jenny Rissveds also took the start, although she withdrew from the race early, obviously in some physical discomfort.

Neff and Indergand really ignited the race from the start, although they had to shake off Britain’s Annie Last before they were free to fly. Neff’s pace soon proved too high for her Swiss Olympic team mate and she rode away to the win. Indergand didn’t come under too much pressure in second, but behind her the chase - which included Indergand, Last, Stirnemann, Henderson and Ferrand-Prevot - was ever-evolving. Last, who is coming back from a prolonged period of illness, dropped back as Ferrand-Prevot showed us that her injury is getting better as she moved up and settled into third. Stirnemann was able to eventually reel in Henderson and take fourth spot. Henderson rounded out the podium in fifth.

Nino was a clear winner in the end, but in the beginning it was a melee of to-ing and fro-ing as the riders scrabbled for position.
Again there were many stars on XC in the Men’s race; a plethora London 2012 medallists and Rio medal contenders. There were the Swiss, headed by Schurter and including Matthias Stirnemann, Lars Forster, Andri Frischknecht and Thomas Litscher. The two-time Olympic gold medallist Julien Absalon was joined by French Olympic Team mate Maxime Marotte, plus a whole host of others including Marco Fontana, Manuel Fumic, Sam Gaze and Michiel van der Heijden.
The start was led out by Gaze, the U23 World Champion, but groups formed and fragmented constantly over the opening laps as the race found its rhythm. Absalon didn’t have the best of starts, but then we know this isn’t his strength but a steady, deadly come back is…
As Gaze faded and Fontana punctured, Schurter began to tighten his grip on the race. Stirnemann was the man to stick with him as others faded until a dramatic crash curtailed his chances of a win. Stirnemann was able to continue and fought valiantly in the final lap, but Luca Braidot, who had been dangerously quiet thus far, was able to overtake into second spot by the finish. Absalon was solid in fourth place, and Litscher, who had led the race for a short while, was comfortable in fifth.
One of the most thrilling battles of all was happening just behind the leaders as Fumic, van der Heijden and Martin Gluth fought a tight battle, never more than a metre or two from each other. They caught and passed Marotte in the latter stages to set up a sprint finish for sixth. Gluth was able to take sixth, Fumic seventh and van der Heijden eight. Marotte and Frischknecht rounded out the stop ten.

Earlier in the day the Junior Men gave us an exciting race, with a large lead group only splitting on the last half lap to determine the podium of this round of the UCI Junior Series. William Gascoyne had a great start and gave the home crowds plenty to cheer about in the opening stages until a puncture saw him drop out of contention. Thankfully for the British fans Cameron Orr was on hand to take up the British challenge. However, a stinging attack from Jofre Cullell on the last lap blew the group apart and he was able to take the victory by six seconds. Nick Burki took second and Ursin Spescha was third, just ahead of Orr.

The UCI Junior Series for Women was won in commanding fashion by Great Britain’s Sophie Wright. Sophie had a conservative start but her climbing prowess soon saw her move to the front of the race and pull clear of her competitors. Anna Spielmann and Lisa Pastiener duelled it out for second and third with Spielmann able to pull clear of her rival by the finish.” 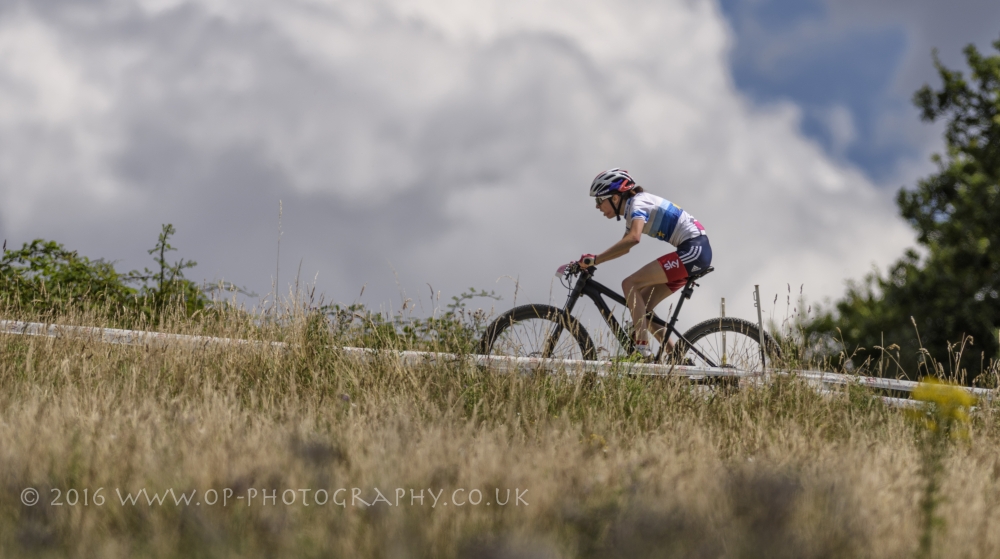 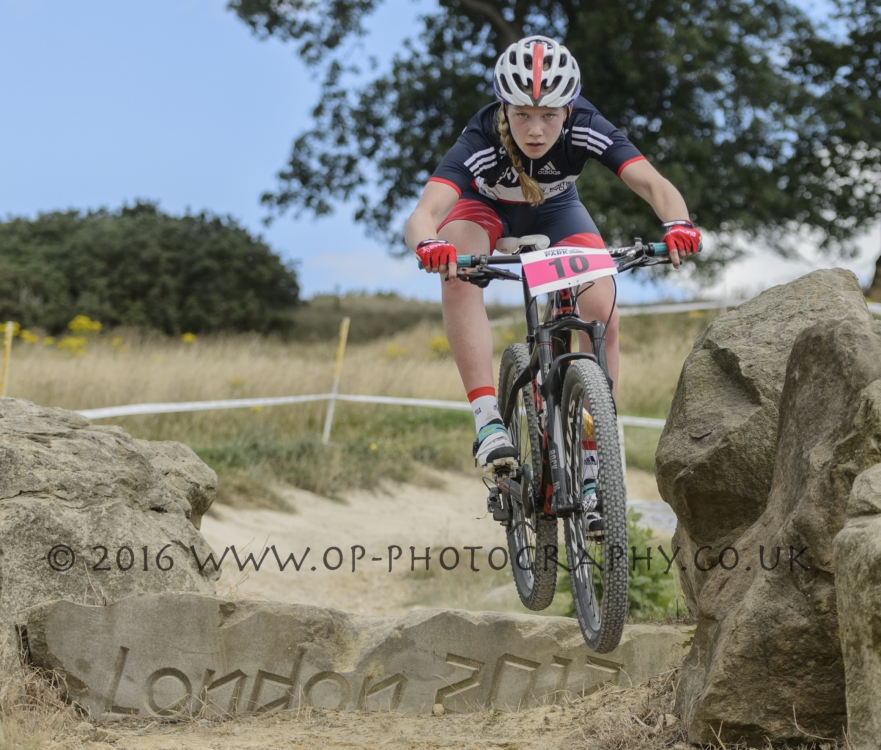 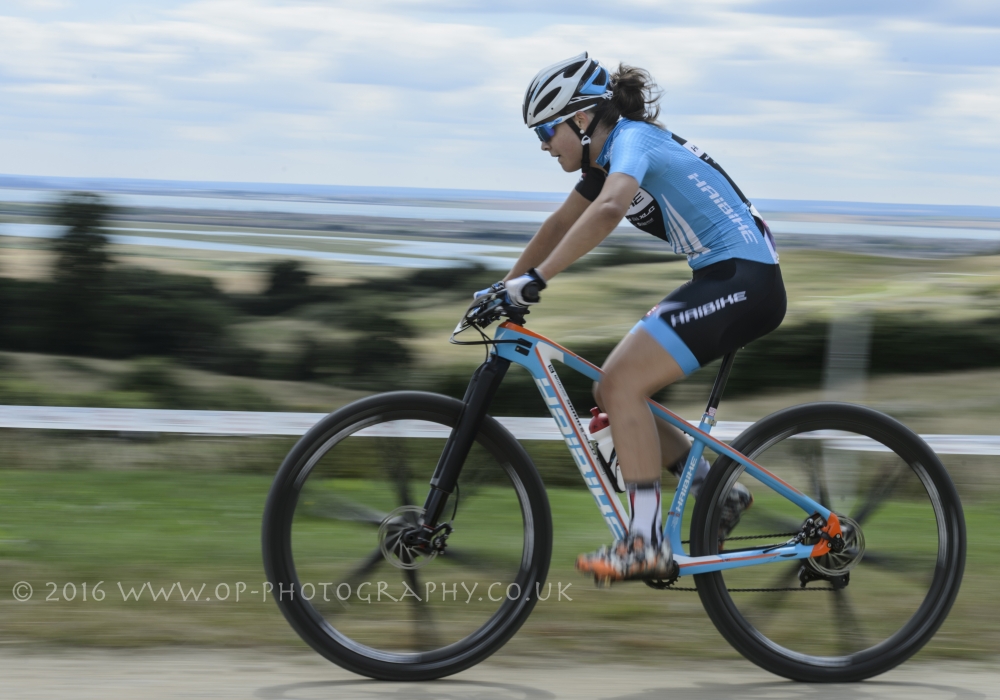 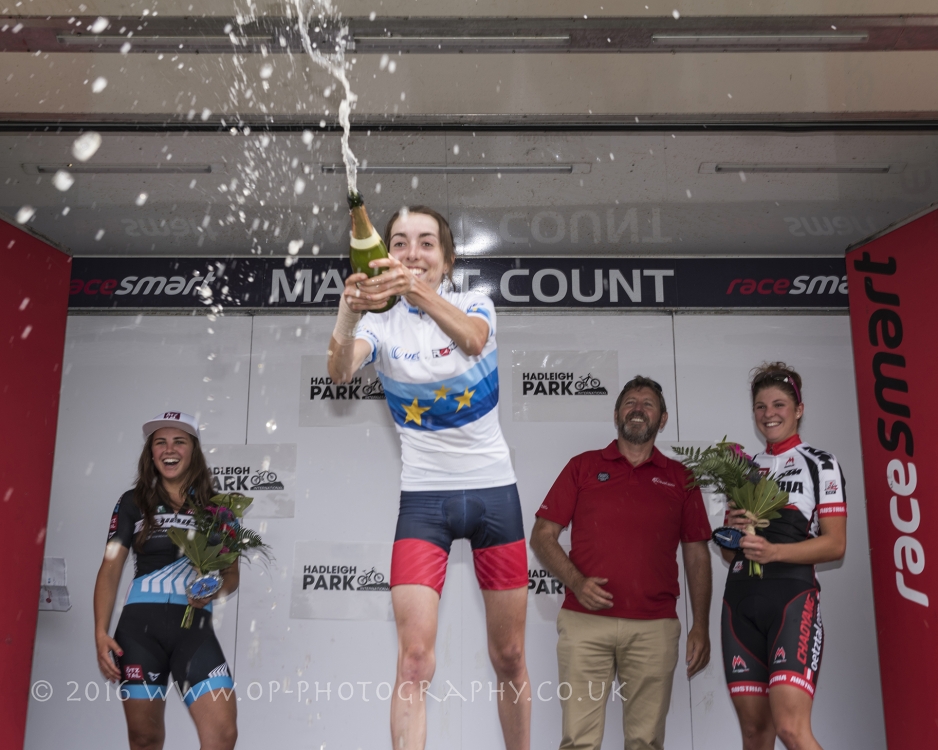 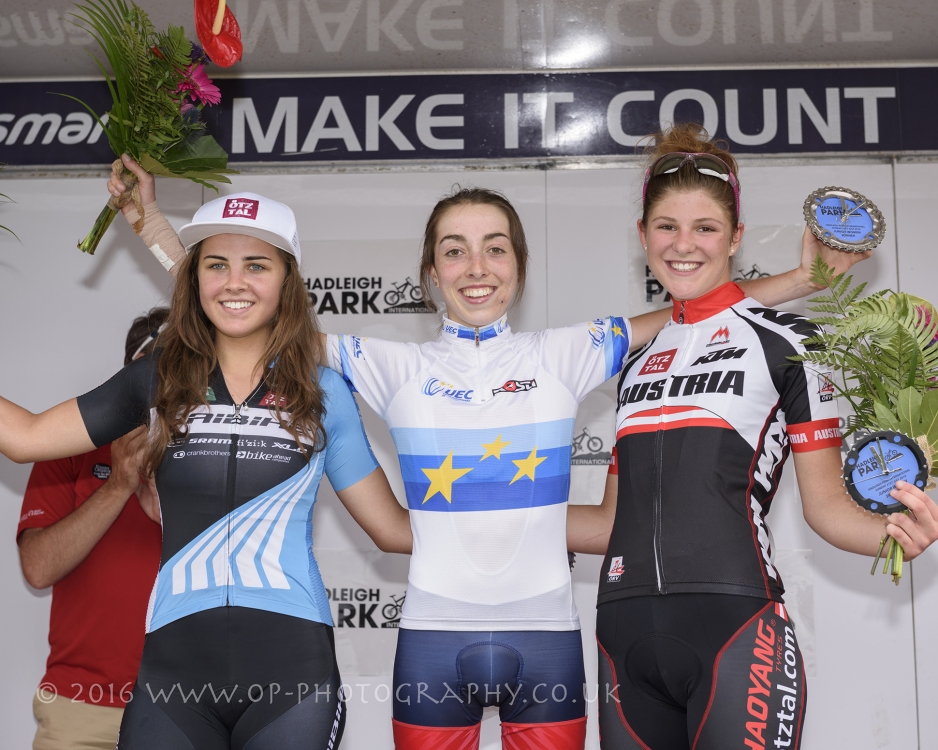 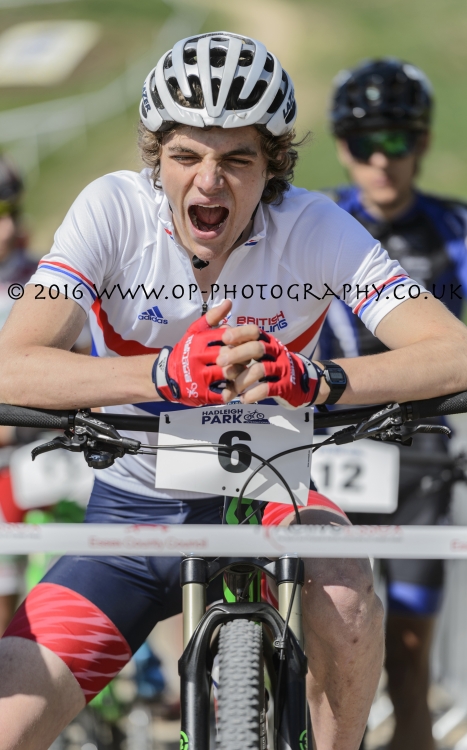 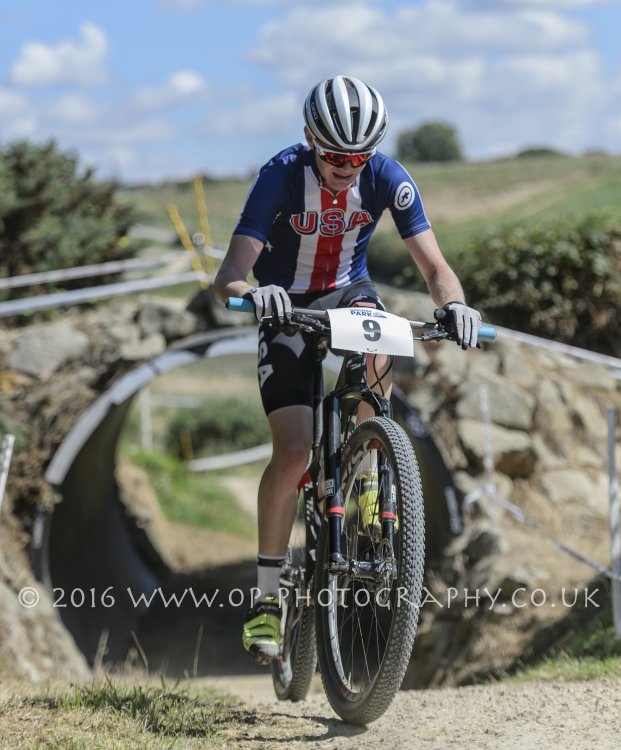 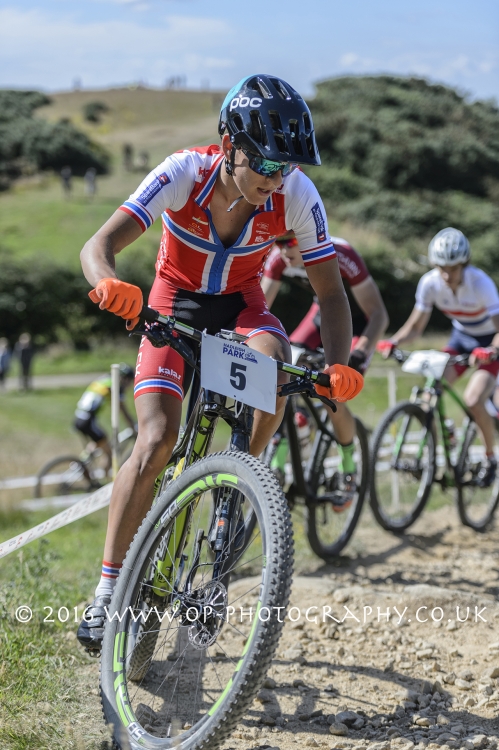 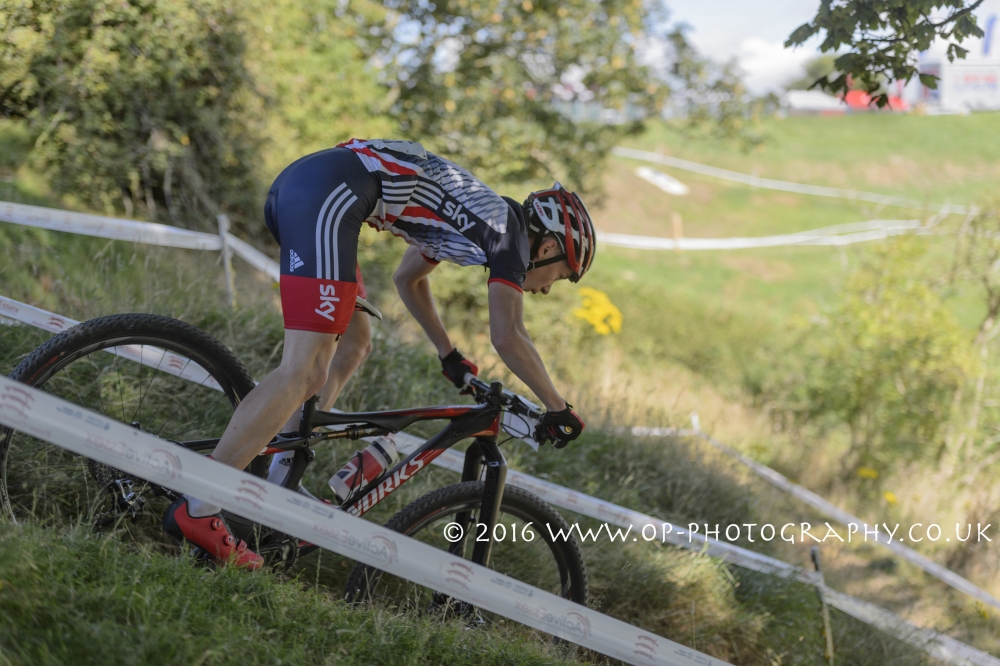 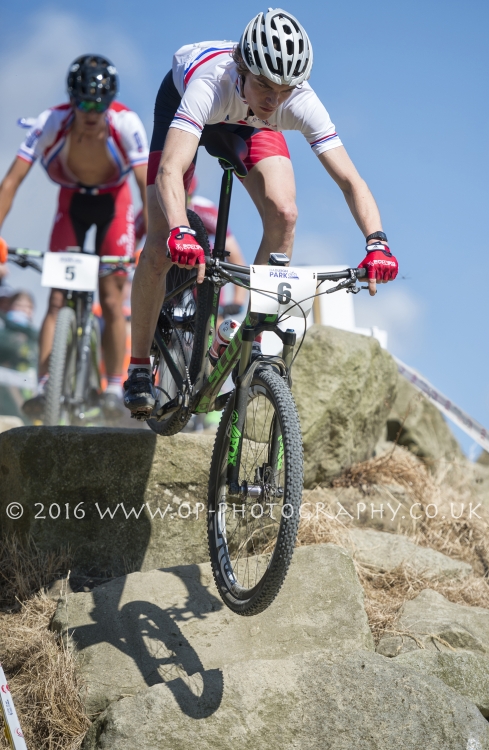 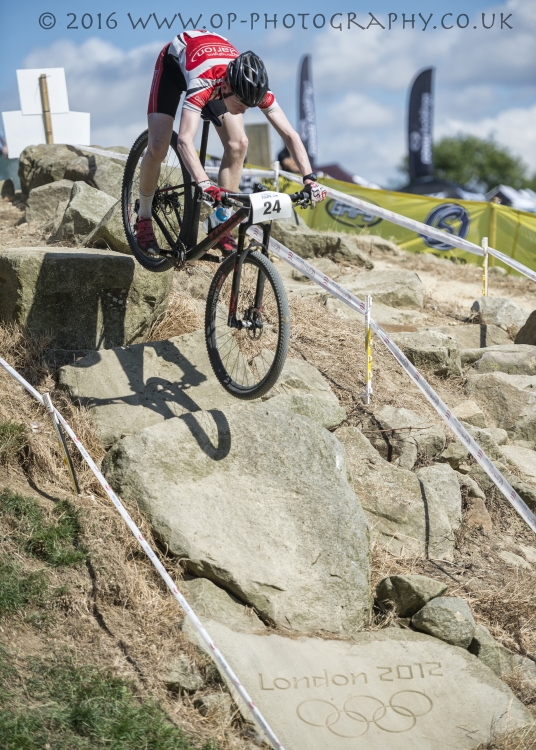 No problems in the Rock garden for No.1 SUI, Jolanda NEFF - STÖCKLI PRO TEAM 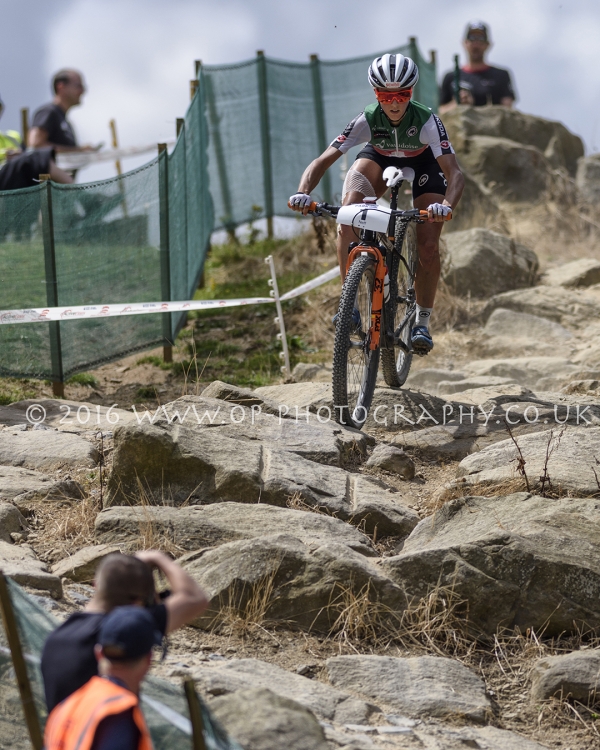 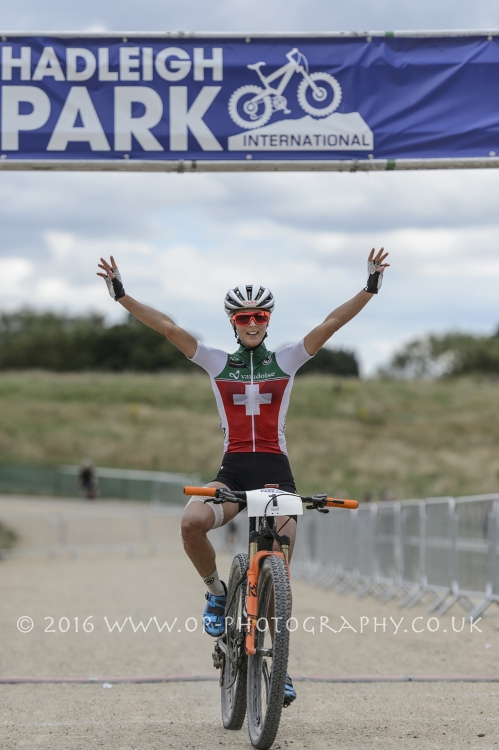 Jolanda NEFF helping Pauline FERRAND-PREVOT with her heavily bandaged arm, prior to the winners presentation. 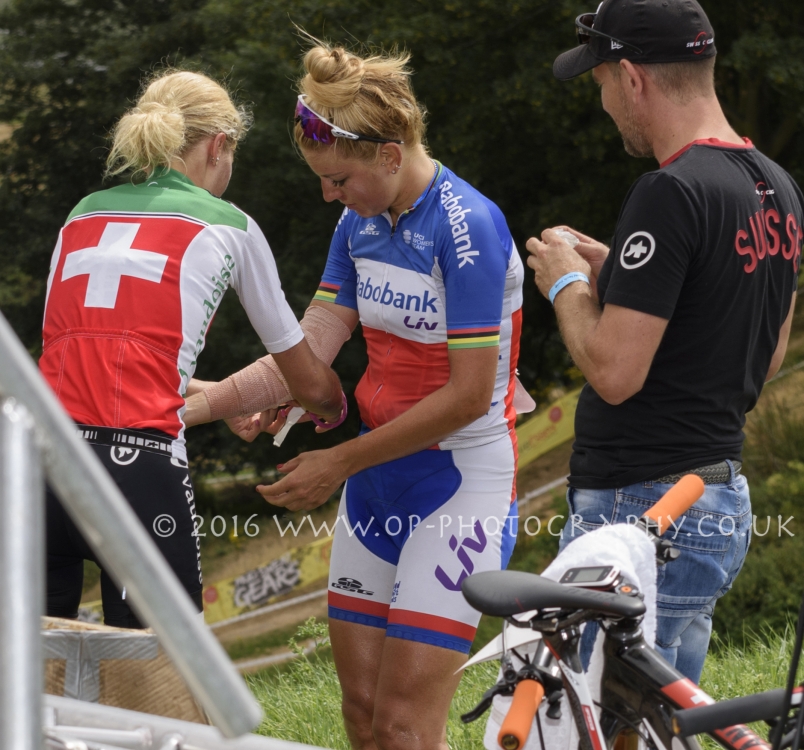 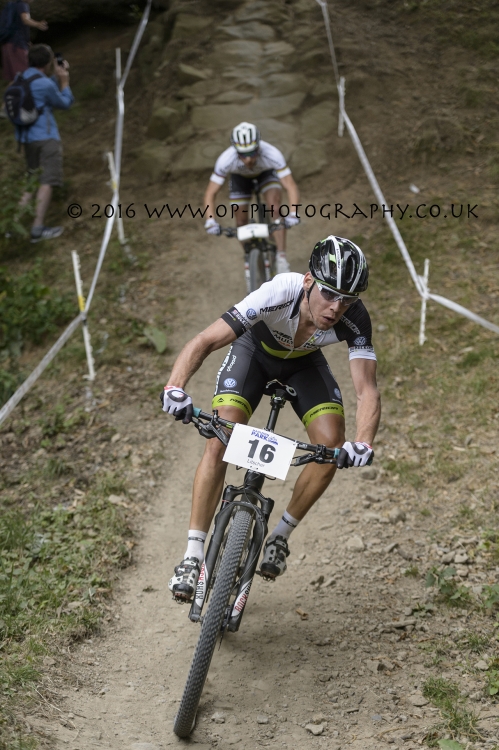 No.28 NZL, Jack COMPTON in the Rock Garden No.10 ITA,  Luca  BRAIDOT takes the Berm at the bottom of Deans Drop at speed, finishing in second place to No.1 SUI, Nino SCHURTER 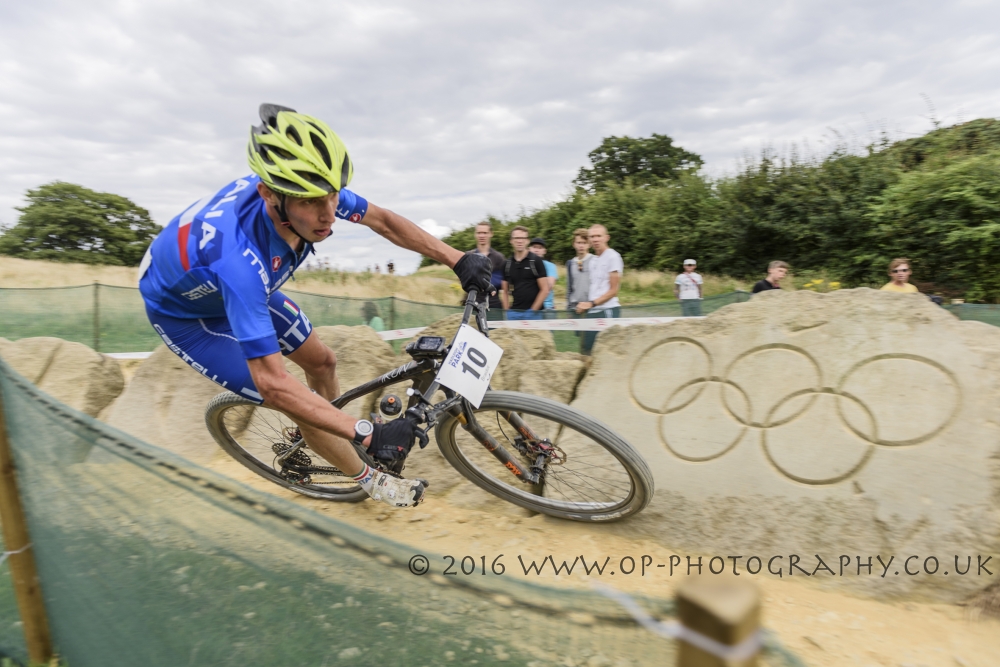 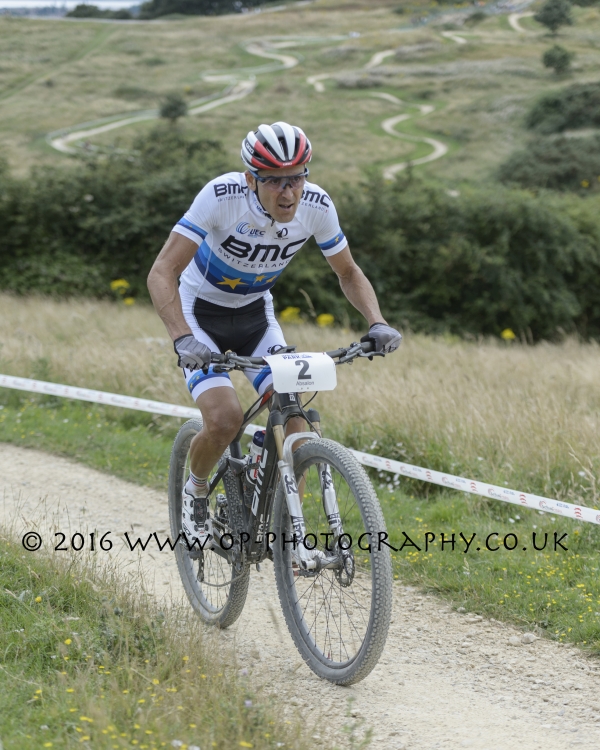 An unfortunate puncture for No.6 ITA, Marco Aurelio FONTANA - CANNONDALE FACTORY RACING, took him out of contention. (next three images) 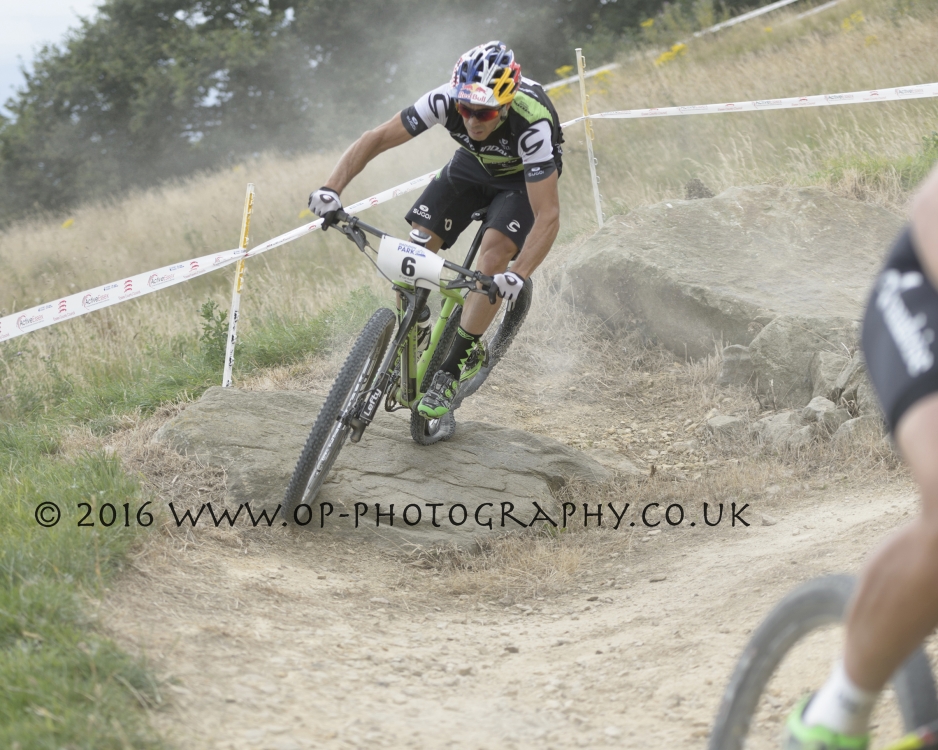 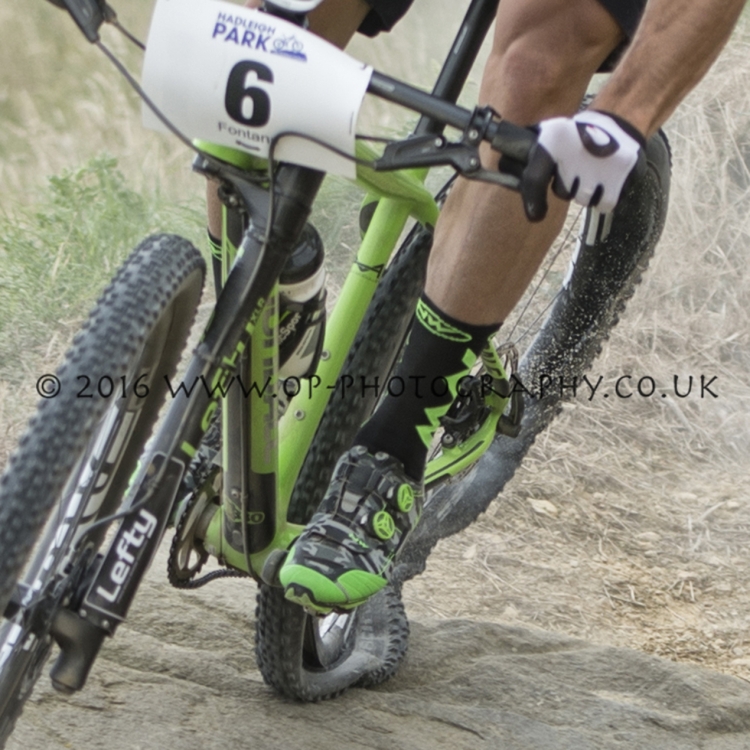 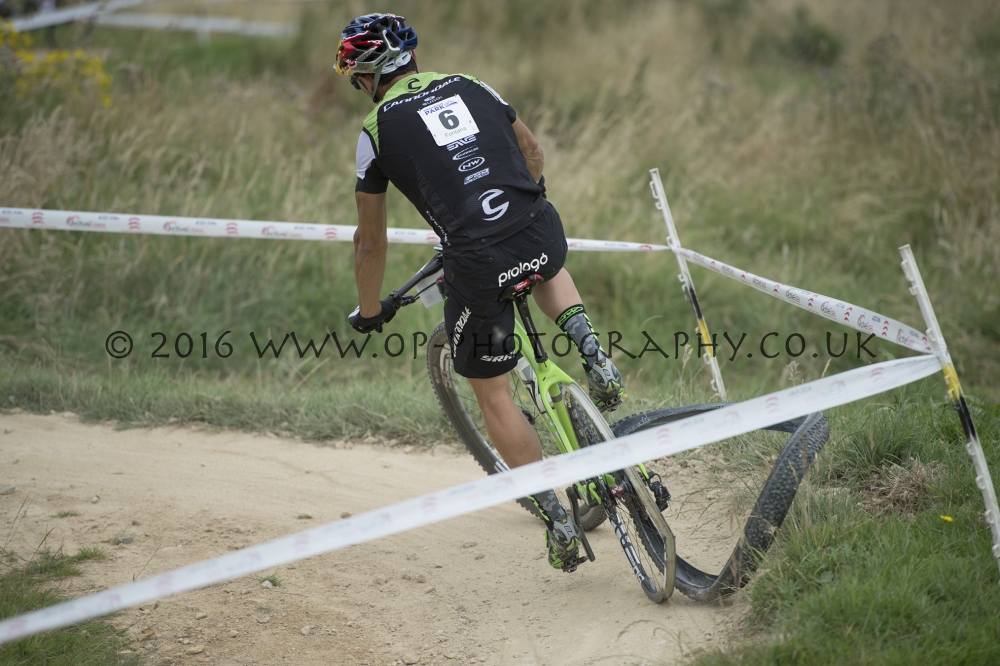 No.1 SUI, Nino SCHURTER - ODLO MTB RACING TEAM, leads the Elite Men home with a
lead over Italy's No.10 Luca  BRAIDOT of 18 secs. Final presentation of the day was made by Mr Gary Sullivan, who led the Essex Olympic Strategic Board, and is now Chairman of Active Essex and Councillor Ray Gooding.
In between them, left to right are:
2nd No.10 from Italy. Luca BRAIDOT.
1st No.1 from Switzerland. Nino SCHURTER in the Rainbow jersey  - SCOTT-ODLO MTB RACING TEAM
and 3rd No.5, again from Switzerland, Matthias STIRNEMANN - MOEBEL MARKI PRO TEAM Many thanks to all on Essex Council and the Salvation Army who own the land, who had the foresight to firstly instigate Hadleigh Park as a site for the London 2012 Olympic Mountain Bike Event and their endeavours to continue it's legacy as a truly remarkable World Class MTB venue.