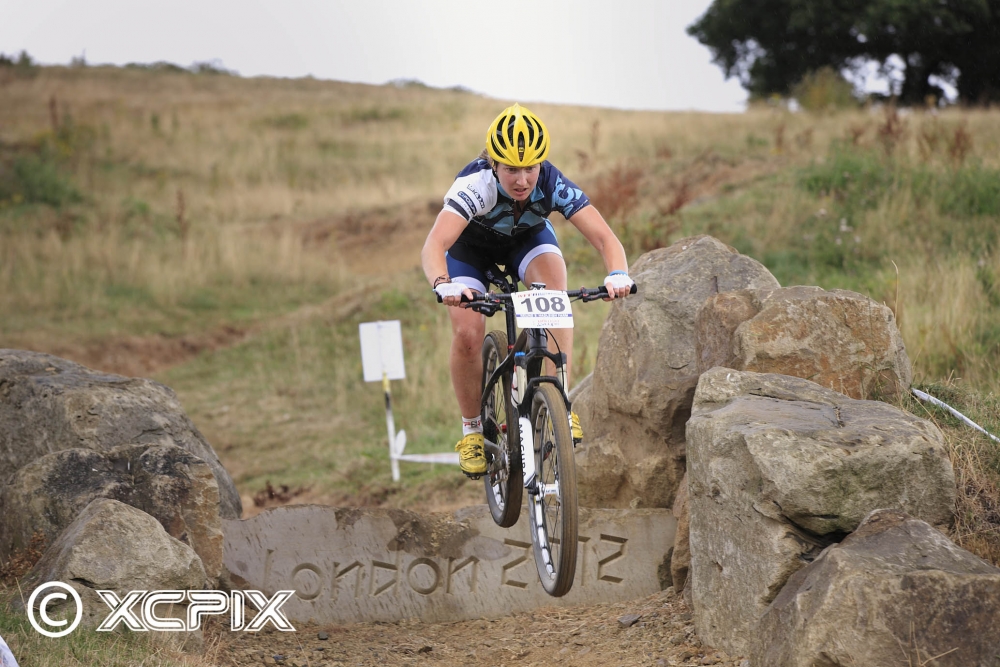 The final round of the British XC Mountain bike series took us back to the venue of the London 2012 Olympic Mountain Bike event, Hadleigh Park. This was a race I was really looking forward to; it was finally a course that would push you technically as well physically. It would hopefully reward technical riders rather than who was the just the fittest. I arrived early at the course on Saturday so I could get a good few practice laps in, learn the fastest lines and get the technical sections polished. The course was exactly the same as it had been for the Olympics and it was an honour to be riding it. My dip into Gravity Enduro has made me a far more confident rider and I tackled each section with a new found confidence and soon began to carry speed whereas before I would've been backing off. When I watched the Olympics I loved seeing riders going over the gap jump, I vowed that if we were ever to race on the course I'd do it. So after some debating with my boyfriend Pete (mostly him telling me to toughen up and just do it!) I took the plunge and did the jump. It felt amazing and after a few times I had it nailed. Round the rest of the course I concentrated on carrying more speed into sections and becoming as smooth as I could. You know it's a tough course when the queue for the ambulance is longer than the burger van. This is the type of course I feel we need more of in the UK, we need to be pushed as riders so when we make the leap to higher competition we are prepared for the more technical nature of the courses. This in turn will hopefully mean British riders will excel at this level. 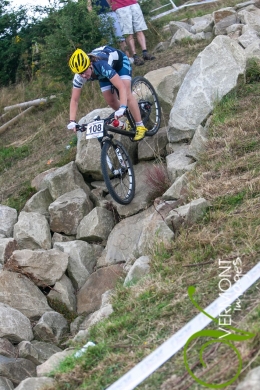 Photo courtesy of Vermont Images
Race day brought sunshine and lots of nervous riders. There was a good field of Elite women, I was  hoping that I could have a clean race and find time on the sections I was good at. The start straight was a really nasty climb that bypassed the first drop and went straight in to the infamous Deanes Drop. I got a good start and settled quickly into a rhythm. I made the gap jump overtaking a couple of riders and carrying a lot more speed out of the section, I was just really enjoying the course. The technical nature made it such fun. It was demanding, not giving you a break at all. After the fun of the gap jump came a nasty section of climbing up the snake. This wasn't a straight forward climb with rocky sections to interrupt your rhythm along with tight switchbacks. This did give me an opportunity to see where I was placed. I could see Hannah Barnes just in front of me and pushed hard to close the gap. Cresting the hill it was a rapid descent down a rock shoot into the feed zone. A quick breather and I was quickly into another climb, this one more straight forward and leading to a great drop the Leap of Faith. I had watched the men's Olympic race the night before and noted just how much speed they were carrying into this section, getting 'air' over the drop. I went in fast and surprised myself by doing the same, it felt awesome although the bigger challenge was making the turn at the bottom. Yet again there wasn't any time to get your breath with a big grassy climb up to a big rock garden. I stuck to the middle line carrying plenty of speed. This lead to the infamous Breathtaker climb, it was a killer but it was all downhill after that, some fun berms and jumps ending with a steep shoot back into the arena. I was enjoying myself a little too much when I over jumped a rocky section on lap four and as I landed I heard that hissing sound you never want to hear in a race as my rear tyre went flat. Luckily I wasn't too far from the pit so I began running up the hill toward the Tech Zone losing no more than two minutes. In the pits Pete was there with my spare wheels but the only problem was I was running a different set up on my new Velocite Flux with XX1 11 speed cassette, however, my spare wheels only had a 10 speed cassette. As I came huffing and puffing into the pit, Pete changed the wheel in record time and gave me instructions not to change gear too often and just find a gear that worked. Not easy on such a demanding course. Going from chasing Hannah I was now defending my position from Jessie Roberts, the problem was I had to be really conservative with my gear changes so couldn't really push quite as hard as I would've liked to I had to survive the final two laps. I can say that the hybrid setup worked to a point and it was a case of nursing it home managing to hold on to fifth place, my best result of the season. 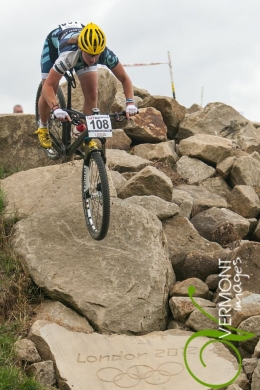 Photo courtesy of Vermont Images
I really enjoyed this course so much and prided myself on using all the 'A' lines throughout the race. For me racing my bike is pushing myself to do things I wouldn't normally, getting out of my comfort zone and pushing to the limit. Call me stubborn or stupid but if there's a harder faster line I'll attempt it and I think for this race it paid off. I'm now looking forward to pushing myself even further by going to the sixth round of the World Enduro Series in Val D'Isere.
As always a huge thank you to my sponsors without whom I coudn't have so much fun; Xcracer.com, Mt Zoom, Velocite UK, Sponser UK, Mavic, Schwalbe UK, Whackjob Jim, Ana Nichoola , Firecrest MTB, MB Coaching and Working Bodies.
Find out more at www.maxinefilby.com or follow me on twitter @maxinefilby

More on the BC National Cross Country MTB Series 2013 Round 5: 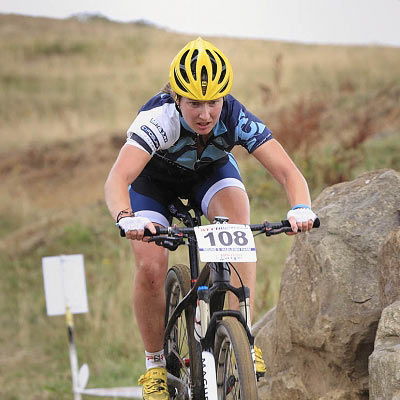