“That was a tough course!”… reassuringly that was from one of the race whippets as we both stood at the finish line at 13.30 yesterday. I was expecting a hard experience, but the course was unrelenting, with roots, spongy ground and little potholes pounding the bike (and me) throughout. The only bits of the course that seemed smooth were the three stretches of firetrack that all headed up-hill.

First impressions are always important, and the Gorrick set-up is clearly a slick organization, which made the time between arriving and starting the race really stress-free. Having everything close to hand meant that getting registered, sorting the pit-box, checking the bike and doing some warm-ups was all really easy – no dashing from one end of a muddy field to another.

The only downer was a wave of drizzle that tracked in just before the 09.30 start, which meant that a large number of the field opted for some ‘heavier’ clothes, but the rain cleared quickly and I suffered the effects of being too hot during that first lap. The first pit-stop meant losing the jacket, heavier gloves and buff – donning an extra base layer tee over my initial base layer, and that was perfect for the rest of the event.

The strategy was to go steady, ride for four hours and see how far I managed to get. That was reiterated by Little Dean, the on-site mechanic, as he came to the rescue at the start line when one of my cleats came loose – many thanks Dean… lesson learned, double-check all my kit the day before the event!

As expected the start was very busy and the first couple of couple of miles were pretty slow, but then the race thinned out and I started wondering whether I was the “tail-end Charlie”, expecting the broom-wagon to hoover me up. For much of the first two hours of the race I enjoyed the solitude of Minley Woods, rolling at my own pace and wondering where on earth everyone else had gone. As 11.30 and the start of the 2-hour race approached, I started to wonder how busy the course would become, with it’s extended sections of singletrack amongst the trees. Particularly how understanding these fresh-legged riders on a ‘sprint’ course would be to those of us with a “4” at the start of our numbers, who’d already been out for two hours – as it turned out, any concerns were unjustified and there was never really any issue.

The ‘tortoise’ strategy seemed to work in my favour, and the fuelling based around Torq gels, malt loaf and bananas worked well. I had big bout cramps in my left leg at the two and a half lap point, and again at the pit stop at the end of the third lap, one of those nasty cramps when all your upper leg muscles want to pull in different directions – but a slightly extended pit-break, two gels, some malt loaf and more water seemed to sort that, and my last lap was pretty comfortable. I did rely on plain old water for hydration, so I’m wondering whether I should have used Isostar or similar to get some salt in the system to avoid those cramps.

The bike did well too – a Giant Anthem 26er clearly carries some extra weight over the carbon 29ers, but it proved to be a comfortable and surefooted steed. So I probably wouldn’t change anything apart from maybe losing the protection of the whaletail if the next race was dry-ish.

Eventually, I raced for 3 hours and 50 minutes, and bailed just before committing to my fifth lap. That put me 59th out of 73 in the 4 Hour Vet’s category… if I’d put in that extra lap, it looks as though as I’d have made 52nd, but not a bad showing for my first XC.

All the race detritus has been put away or in the in wash now. The bike is still in the car, but is coming out shortly for a well-earned clean. How do I feel?? I was truly whacked yesterday and haven’t felt that tired since joining a sponsored ride with a team from Arval aiming to get from their office in Birmingham to the Swindon HQ in 4 hours - I’m feeling stiff, but with no lasting aches or sores, so I’m pretty happy with my performance and looking forward to the next round.

Misc. thoughts from the day…

Tip 1 – help the faster riders to get past and talk to them as they come up behind you. I prefer to let riders past on the right, so I hold the left hand line and talk (or point with my hand) to show where to pass.

Tip 2 – If you’re a race whippet, don’t try to push through a gap that isn’t there… no apologies for holding my line on that short steep rooty climb with a sharp right at the top and having someone try to barge through on the inside, only to slip on the roots and fall back down the slope.

Tip 3 – When someone makes way to let you pass, it’s always pleasant to say thanks… 99% of you did, but blue-jacket-orange-shades-rider, you know who you are.

Tip 4 – Put more than you think you’ll need in your pit-box and give yourself options to suit how you feel… a slab of chocolate may not be the ‘right’ fuel, but as a boost it really hits the spot. 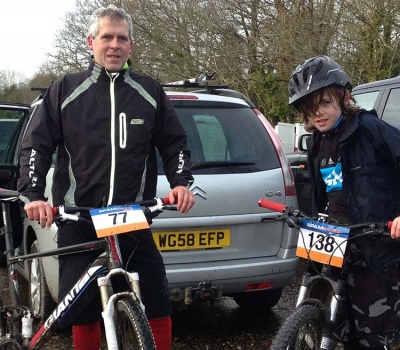 Soon to be Grand Veteran and a keen recreational cyclist who’s started and is still supporting a very informal club scene in Malmesbury. A catastrophic crash in June 2013 stopped me cycling actively for three months, but I'm back in the saddle and signe