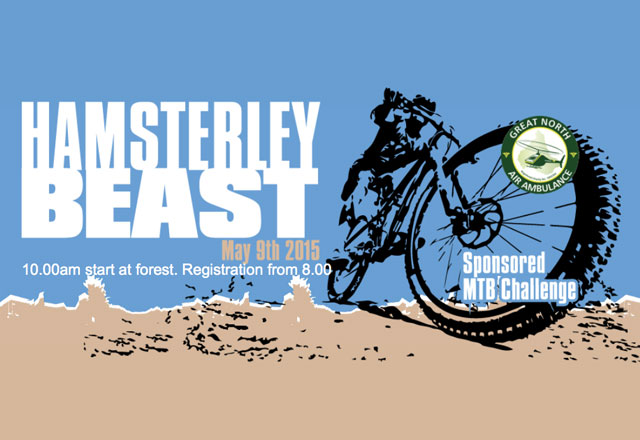 Browse upcoming and previous events by The Hamsterley Beast

The idea is to raise over £10,000 to benefit the GNAAS (Great North Air Ambulance), which costs £4 million a year to run, and relies on charitable donations.

It runs three helicopters operating 365 days a year and responds to around 1,000 emergencies a year across the North East, North Yorkshire and Cumbria. On board the helicopters are specialist trauma doctors and paramedics. This month GNAAS announced that they will also carry blood for in-air transfusions to help save more lives; it's estimated that 50 people a year in the region die of blood loss before they can receive transfusions.

Beast organiser Chris Carr from Prudhoe said, "Because of what we do and where we do it, the air ambulance is often the only way to get help for an injured rider. That's why we want to give something back."

If you want to take part in the Hamsterley Beast, it'll cost you £20, or £16 for a parent and child and £30 for a family of four. There will also be prizes for people who raise the most money. Closing date for online registration will be Wednesday 6th May 2015 but on the day registration will also be welcomed.

"There'll be a bit of everything: some of the fun fast red/black routes; some technical single track riding through the forest as well as some lung-shattering climbs.

"It's not a race. So it doesn't matter what you ride or how you ride it. We're all just going to be there to have fun and make as much money as possible for a great cause"

Riders can also raise money for the event and there are some great prizes donated by the likes of Pro Ride guides, Endeavour MTB and massive attack paintball.

View Hamsterley on a larger map »