Day 4 of the Glasgow 6 day. It's Rollapalluza time. Two bikes, no resistance, head to head. 500m, ready, steady, go! It's that simple. The Glasgow round of the national series was in Dales Cycles warehouse, had some Rock, Drum and Bass, Breaks and Jungle cranked up.....and there was free beer. Free beer in Glasgow I hear you cry, what were they thinking? 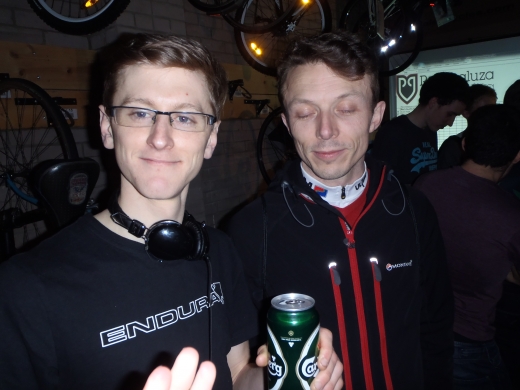 I rocked up early with local Rocker Jake and Rab Wardell (alpinebikesracing.com). We raced XC. Surely we'd be the best right? Rab even wore his headphones around his neck for extra street cred. What could go wrong?  Well early on, we qualified well and looked like we might do good. It was still pretty quiet and I talked my biggest fan and 'pit girl' Caroline into having a bash.....and lucky I did.

What could go wrong? The Edinburgh train pulled in that's what. Off got some pretty quick Edinburgh Uni lads, and some even quicker Trackies. Sprinter Kenny Ayre blitzed the field and put World Cup DH rider Chris Hutchins into second. I got pushed down to 11th and Rab went to 18th. Last 16 qualify. Eh? Rabs really good at riding XC. Surely this shouldn't happen. The womens times started to tumble, and Carolines early benchmark went down but she made the last 8 qualifying 4th. Good job. 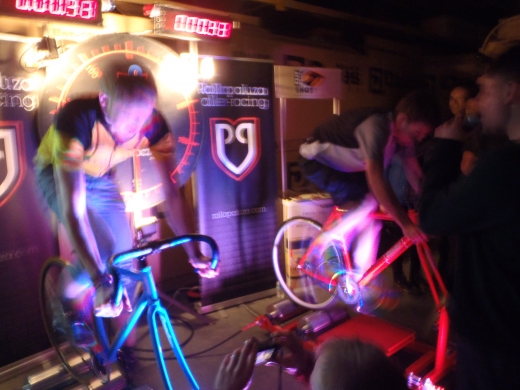 Finals time. The crowds had got bigger, the free beer stash had got smaller, the music had got louder and the commentator got more offensive. It was getting really good. Kenny Ayre started to make it look easy. He was glancing over his shoulder to see how far in front he was and then coasting to the finish in his quarter and semi final! I got knocked out by a tenth of a second to an Edinburgh Uni lad. Gutted. Caroline made it to the small final! That commute must be giving her some leg speed. 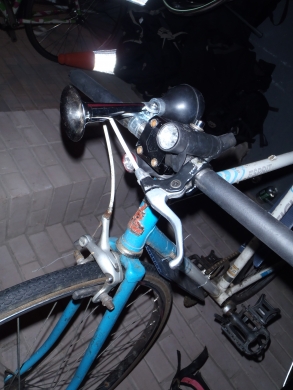 Finals time - well the top 2 mens qualifiers Kenny and Chris made the final and Kenny won the restart after he broke the machine in round one spinning his legs at about 250rpm and doing 54mph!!!! 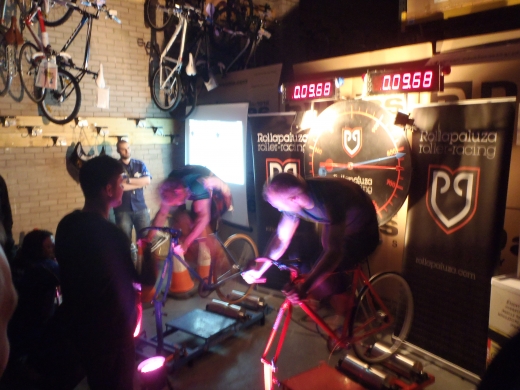 Katie Archibald (I think that's your surname and if it's not I aplogise) won the womens. She comes from a grass track background at the Highland Games. Wait 'til the Glasgow Velodrome opens and we might have a new Pendleton there! She's only 17 and rapid. I was being the proud 'pit man' as Caroline 'Va Va' Vance took third place! Good job. None of her prizes fit me though. Rubbish. Might be trying to trick her into getting on the velodrome too! 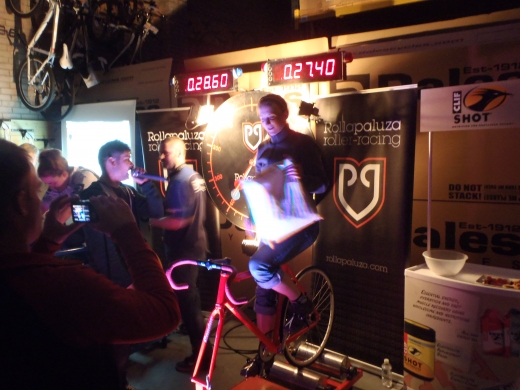 If you fancy a bash at this check www.rollapalluza.com. It's probably a good skill to have if you ride track or BMX. If you ever put a 200rpm+ resistance free effort out in an XC race I'd guess you're not pacing yourself very well. Go and do one of these though. It's a great night out!

Right, I'm off down pit to dig some coal