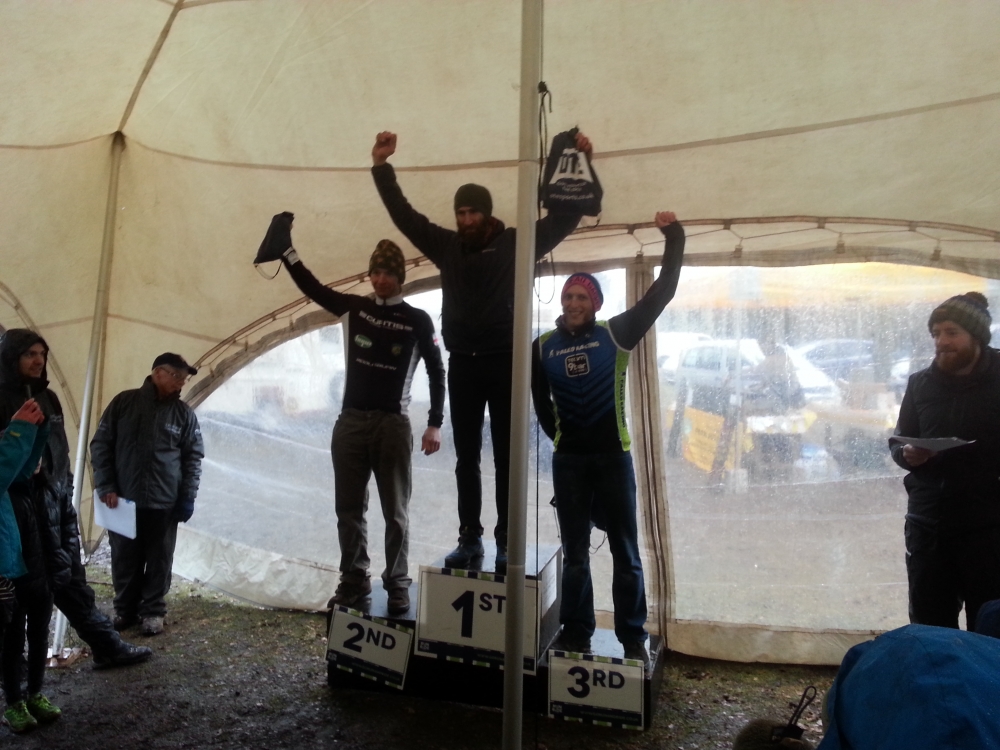 Run and Ride Winter Classic - hell on a singlespeed

Ouch. Racing a singlespeed in a proper singlespeed race with other hardened singlespeeders is hard. Properly hard. Singlespeed, singlespeed, singlespeed (didn't think I had said it enough times in the last two sentences).
Put differently, I raced the Run and Ride Winter Classic at Cannock yesterday. It was brutally difficult, with wet mud and climbs being the name of the day. Upon signing on after an uneventful trip down to the Tackeroo campsite I saw there were only thirty riders signed on in my category, so I thought there would have been a good chance of podium, if not the win. Until I saw a familiar name - none other than Jason Miles (aka @Terrahawk, of Strathpuffer and the tandem episode of Speed fame). This considerably changed the tables somewhat! Regardless (and slightly daunted) I went out for a spin round the course with a friend to scope it out. The course was generally fast and flowy with some truly horrible sticky climbs. Which then got a lot worse when it started raining at the start of the race.
Using my Kinesis Decade Virsa, I had decided on a racing gearing of 34/17 - which is around 55 gear inches. This would have been fine in the dry, but got increasingly harder to push as the race went on. The pre-ride had shown me able to climb up any of the hills on it, but as the course deteriorated later I was relegated to running up most of them.After the pre-ride I had a debate with myself regarding clothing choice, eventually settling with a base layer, arm warmers and jersey. I decided against knee warmers or overshoes due to the risk of having to run which may have slowed me down, or caused me to overheat. Pretty happy with it in retrospect. Around two hours pre-race I had a Beet It shot, a 9Bar Indulge and some dried fruit and settled in under my EZ Up to watch the youngsters race. Nothing quite like seeing a bunch of under 10s having a whale of a time to make you smile! I reckon the dads were probably more competitive than the kids....
Soon enough it was time to line up on the grid and true to form the British weather made an appearance and it started raining. Hurray. I lined up on the front and had a brief chat with Jason - he had chosen to race a fatbike and I began wondering if the size of the tyres would outweigh the advantages that gears gave you. We would soon see. I kept my coat on until the last minute when another friend very graciously took it from me and headed to the pits to bottle. The geared riders headed off and then it was our turn. The gun went off and I sprinted off the line, keeping the lead until the first corner when over-exuberance led me to burp the air from my front tyre. Whoops. I quickly regained the lead and began passing the back markers from the previous race. I got a bit frustrated as my higher gear and skills in the slippy mud got me some distance on my pursuers, but getting stuck behind a slower rider would allow them to bridge back up. I led the first lap, before the course deteriorated and I slowly lost time. Grinding up the climbs at 40rpm turned out to be ineffective and I was soon off and running. Unfortunately the tougher gear was more of a hindrance than a benefit so I'd gear down next time and spin more instead.
The course itself was great, a few sections of fireroad to give some overtaking space, great woody singletrack, enough gradient to be interesting and some good technical sections too. Just a shame I couldn't keep the pace up, however finishing on the bottom step with two other singlespeeders was good enough for me given that I'm still in training for the season. Onwards and upwards! (On a side note, it turned out that riding a fat bike in the mud was akin "to towing a caravan behind you round the course!")
Feeling good about the season now and keen to keep it going!
Many thanks as always to my wonderful sponsors:
9bar
Chain-L
LV
Mike's Bikes
Beet It
Sussed Out Suspension
ESIgrips 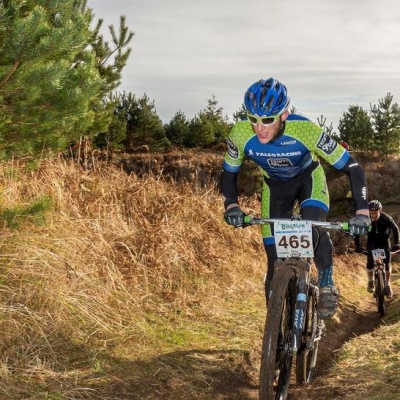