Life's been busy, but finally a belated blog with loads of race reports ....

One of my key target events for the year and most of the top Ultra Endurance mountain bikers were there.This year Ian Leitch had travelled up to help and Dave from MS Steels cycles was spannering for me and Rich Rothwell.

Always twitchy before the race making sure as much preparation is done in the pits I'm glad to get the race on. After the lead out by a bit of local razamatazz (bagpiper) the early pace was fierce. There were 12 hour racers in the mix pushing hard and the key 24 hour players were pumped up following. Half way round the first lap I caught up with some of the usual suspects, Matt Page, Josh Ibbett, Rich Rothwell and Dave Powell. Matt got a puncture I think on lap two. Within a couple of laps Matt caught up and pushed ahead. This split things up a little. Dave Powell had dropped off, Josh chased Matt, I eased away from Rich to latch onto Josh who was unsettled after a crash. It had been clement for the first few hours, but by now about 6 hours in it was raining a lot. The opening part of the course was through a couple of wooded sections which would mess up the bike. The nice trail centre sections, with its now lying water, would clean the bike. The mud would be revisited on the return (not great for those helping in the pits). From the 8 hour mark I was changing bikes every lap. Dave was working hard in the pits on the bikes (thanks mate).

At this stage in the race I was feeling strong. I was happy with how it was panning out. I figured that having Matt couple of minutes ahead was a good thing. He might be burning energy / power and not enjoying the closeness of the chase. I reckon around the 10 hour mark Josh dropped off and I inadvertently caught Matt. We rode together for a couple of laps. Our pace relative to others on the course seemed impressive. Only the winner of the 12 hour (James Lister) was going quicker, and we were not far behind him at the close of that event. Matt was pitting first, so on one lap around midnight I had a dig to see whether he had the stomach for a fight. Clearly he had as I only managed to gain a couple of minutes. I decided to switch strategy back to plan A, let him go into the lead again. I went into the pits to change into my warm night gear, figuring that being all toasty would preserve energy and I would come through in the difficult small hours. Matt zoomed through, still in  day riding gear. I took a bit too long in the pits figuring out what was best to wear but felt ok about it.

The next three laps I felt like I pushed hard, but I lost chunks of time. When the gap got to about 20 mins (in the 2 - 3 am point) it was clear to me that Matt had improved once more on the previous year and I wasn't going to overhaul him. I was happy with 2nd, given some strong threats in the field, but needed to protect that. Josh made a spirited fight back, coming with 10 minutes of me before pulling out with a bad back. Dave Powell fell ill in the night and withdrew aswell. Rich Rothwell who had given a lot early on was over hauled in the Vets race by Mark Spratt. I pushed on to through the chilly daylight hours making sure that Mark Spratt wasn't going to catch me and I wasn't going to be lapped by Matt Page. Luckily I only had to do 19 laps and 22 hours, it then stopped raining. I didn't feel too beaten up at all after the race which is good news it's early days in the UK race season :)

On reflection I know I didn't take on enough energy in the first half, most of my energy was in the fluids and because of the fluid coming from the sky a resultant lower temperatures I didn't drink enough. I didn't really bonk, but I did have a big relative loss in power. I will have to force myself to eat/drink more, when the heat of battle is on, … I will no doubt have plenty of opportunity to practice this.

A week after the UK 24 hour champs I headed to Aske to do the Northern XC Champs (Vets). I knew it was going to be very tough asking my legs, heart and lungs to perform . I justified the trip as it was the same venue as the National XC champs in July. The course wasn't particularly technical. It was exposed and windy. The start would be good for the National Champs, a real open long bumpy drag to spread things out.

All went well in the race for about 4 minutes. I accelerated into the lead, surprising myself and took it out up a long bumpy climb into a head wind. Behind me there was a long line of riders taking cover. A quarter of the way around the lap Dan Cook and Noel Clough, who I had jousted with closely at the 1st round, went past. There was nothing I could do to hold on. I was then passed by John Hick who set off to chase down the 2 leaders.

For the rest of the race I had Scot Iain Nimmo to joust with, and latterly Stewart Coates. On the final lap (lap 4) I decided to hurt myself on the very steep climb half way round and see what happened. I pushed myself very hard and got a gap. I figured if I could hold this through the singletrack I'd be ok, as I was riding the long gravel drag into the wind at the end quite strongly. And so it turned out. I got 4th, 7 seconds ahead of 5th. I was 4 minutes down on Noel Clough, the winner … so quite a gap close to close for the National XC champs in July.

I needed this one. Training was suffering, life was getting in the way. This was my best way of getting a seriously long hard ride ahead of Mountain Mayhem 24 hours, 3 weeks later.

A 12am start saw me battle in the opening few laps with the top team riders before settling into a solid solo rhythm. I was self supporting in this race, so every lap I would grab a bottle, a gel and banana and hope the clouds would behave and not rain. Every lap was accompanied by banging tunes on my ipod. The course designers deserve a pat on the back, swoopy fast singletrack was laced through the woods. It was pleasure to ride this one right to the end, into the dark.

At around night fall I was told I was 18 mins up on the second second a few laps previous. A lap later a strong solo rider caught me. I wasn't sure what was going on. I really pushed hard for the final couple of laps to open up a gap on the rider. At the end I was told I was actually a lap up and won a Charge mens town bike. Yay.

The racing continues, again filling in the training gaps … over Ipswich way. This time it was a long Vets XC. The weather was glorious. The course dry and sweet. Ace. 8 short singletrack laps.

We started just after the Elite/Expert and Masters fields. This race was all about sustained smart power application, passing back markers very carefully and holding your front wheel on the dusty turns.

Andrew Manning took an early explosive lead. Lloyd Bettles & I reeled him in. It was super difficult to make a decisive brake early on. The chances were that if you made a burst for it you would be held up by riders that had set off in earlier starts.

On lap 2 we shed Andrew who had been suffering from an injury. Lloyd and I rode strongly but tactically. The race was scheduled to last at least 2 hours. It was a pan flat twisty singletrack course. Lap after lap Lloyd and myself were glued together. I played it cagey and tried to do less work. It was too cagey on reflection.

On the final lap Lloyd held the pace very high and I didn't have the opportunity to make a move in the 2 places you could actually pass. Lloyd exited the singletrack ahead and there was only 50 meters of field to sprint in. No time to get past, even if I could sprint.

Everything went my way for this race, apart from the result.

It rained and course got seriously cut up by 3pm when the Vets class started. This meant the race was longer and draggier than the usual. I had made the right choice on tyres the day before with old skool mud ones. I was looking forward to being positioned further forward on the grid than in round 2 and there was a long lead out into the singletrack.

The start was ok. I gained a few places but there was some dabbing as we hit the first hill where the leaders got away. The course was very mashed up compared the practice lap I had done 3 hours earlier. It was fun though, sliding around trying to keep upright. There was a couple of heart in mouth bomb holes on the lap which I rode every lap, which was nice.

I made up a few places on laps 2-3 getting up to about 12th, but I seemed to losing timing on the second half of the course. The riders around me seemed very powerful and determined. Towards the end of the penultimate lap I was caught by three riders from behind, not good. I couldn't seem to eek out enough power to get away again at the beginning of the final lap. My brakes had been grinding particularly badly, but the rest of the bikes was working very well.

It was close with the riders around but I came off worst in a group of 4 or 5 and rolled in 17th. I wasn't that happy with result. It was just one of days when the top Vets were out in force and I wasn't on my game. Enjoyed the race though, but must try harder. 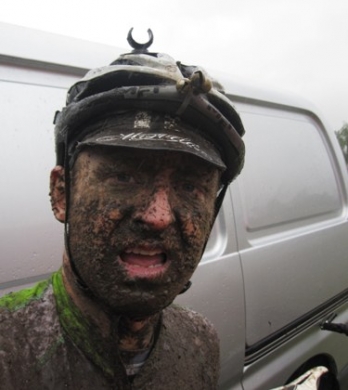 I cramped in the van while getting dressed, so under estimated my hydration needs having only a mouthful of drink in the race. The next day when I finally got around to cleaning the bike I found brake pistons on front and back seized, so that would have reduced propulsion somewhat. Reminded me of what it takes to deal with mud. A timely lesson with bad weather forecasted for Mountain Mayhem 24 hr this weekend. Frig!

Thanks to my key sponsors