Everyone needs an Alpine fix now and again, or more than that. On route back from the Sellaronda /World Marathon Champs in the Dolomites we thought it would be a good idea to do a 3 day mountain bike stage race in Austria, called the Zillertal Bike challenge.
There were 3 different lengths to pick from. The King/Queen event was the long one with 200km & over 9000 metres of climbing. There were shorter distance categories which eliminated some of the climbing, via the use of cable cars. Following on with the regal theme these were named Prince/Princess & Lord/Lady distances. We plumbed for the long one of course. Particular highlights were the climb to 2500 metres on day 2 and the 2600 mountain top finish at the Hintertux glacier on the final stage. 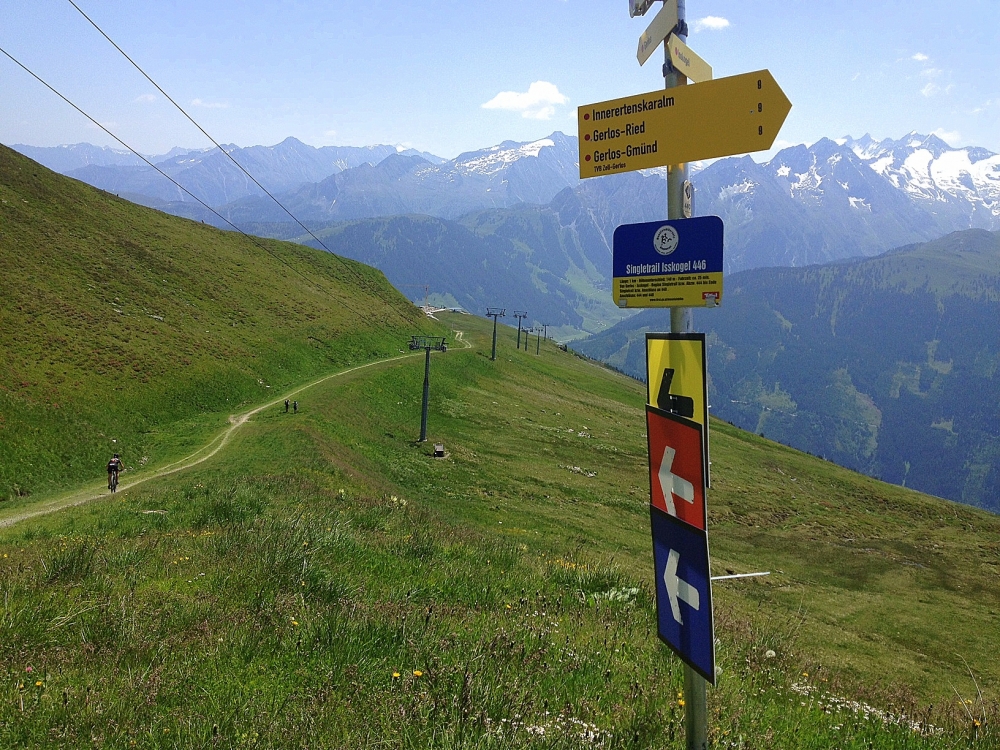 There was a 15000 Euro prize fund for the Elite and U23 categories, so it was going to be rapid at the front end of things. I wasn’t particularly confident on how the race would go for me in my Veteran’s age categor. I had rather over indulged myself in the Dolomites riding (not racing!) the Men’s & Women's Sellaronda course a few times & doing the Dolomiti Grand Fondo 200k road race on the mtb.

The race started in the race registration town of Fugen and ended up where we were staying in Zoll. We caught the local traditional train to the start (you get issued with a pass to travel on local trains free). There was about 500 riders across the categories. Tip: Get to the start early in these parts if you want to get a good grid box position.

Cue Euro pop and we were off. The race started with a 1000 metre climb over the first 15km. Pretty immediately I didn’t feel spritely on the bike. The tyres felt like they were glued to the road, it was hot and humid … perhaps they were melting in this European heat wave. I was making hard work of getting through the field but settled down on the fireroad with the shade of the pine forest. I was still urinating sweat through my elbows though, to trying to stay with the riders around me. I was thinking about checking my bike at the first feedzone to see if there was something rubbing, but I was with a group but I didn’t want to lose.

The first rough gravel descent was fast and fun. I started making up a few places on the first half of the 2nd big climb but my legs were starting to twitch with mini cramps. Power dissipated, and I lost a few places. It was about high cadence spinning now & damage limitation.

At the top of the final climb at about 2000m I was greeted with a thunder & lightning storm. It was cooler now thankfully, but the large hailstones were somewhat disconcerting. The descent to Zoll was fast. There was a bit of nice singletrack halfway down which caught me by surprise.

Ultimately I finished 49th from (from 214) overall and 7th in Vets (from 50) in 4hrs 07 mins. The Vets leader was half an hour up … miles ahead then. I set about making those marginal gains for the next day in the evening. I had a better wheelset with less tired bearings. I also put on a lighter rear tyre & pumped them both much harder. I hydrated properly that night and got a better night’s sleep in the hot weather.

When we rolled the couple of Km to the start in the morning was an announcement. I could tell by the look on the other rider’s faces it was an important one. When the translation came we found out that a local rider had crashed & died on the final descent the previous day. Tragic news. The second stage was neutralized as a mark of respect, the right thing to do.
We were given the opportunity to rest or ride. Most chose to ride. I rode with Iwona and tried to preserve energy. It was nice to ride conservatively and take in the spectacular views. I even took some photos. Although we were trying to take it easy it was a tough ride, and would have been challenging to race. The first climb was 19km, 2000 metre straight up to the snowline at 2500m. 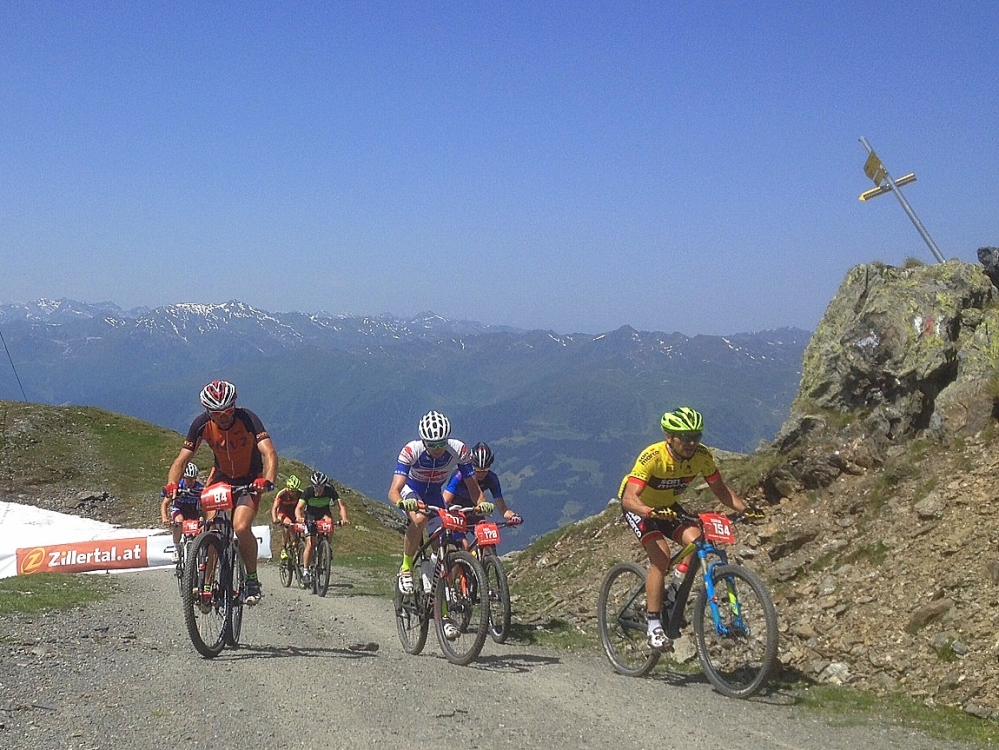 It took over 2.5 hours and got increasingly tougher until the 35% final drag which got us off our bikes. You don’t get those in the Forest of Dean. There were some great views from the top, the down hills were more varied and rewarding compared to day 1.
The final climb was hot. The tan lines were coming along nicely. In the end it was a 6 hour spin. Not ideal for being fresh for the final day, but definitely worth the ride.

I took a risk and changed to a rigid fork for stage 3, to turn the bike into an outright climbing machine. Essentially this was a hill climb stage. We started at 600m, finished at 2600m. If I could negotiate a bumpy 10k downhill half way through it would be shrewd decision.

Things worked out well on the first climb (a mere 21k!). I was high enough in field to know my position, 33rd after an hour … I was hoping this might mean some good gains in the Vets age category. I started the descent, there seemed to be a few new faces around. The riders around me were now getting fed on the course, rather than stopping too much at the feedzones. I lost a few places on the descent as had to take it cautiously on the rigid fork. I would have been faster with less sore hands. Thicker grips (ESI Extra Chunky etc.) & adjusting my brake levers closer to the bars should have been done in hindsight.

The final 25km climb was a toughie. I got a good draft on the road section up towards the Hinterlux lower cable car station, but then I was hanging a bit.
There was a spectacular view up to the Hintertux glacier to lift the spirits. Tantilisingly we could see where we were heading to, up many steep switchbacks to the glacier. We joined the other categories to ascend the final climb. I lost 1 place early on. I could see another guy in the King category coming from behind as well, but I was gaining on another rider ahead. This all played out for 5km in very slow motion, between 2000 & 2600 metres on a rough 25% gravel climb. In end nothing changed and the steep finish appeared at the bottom of a spectacular summer ski slope/glacier. Top aerobic workout! I finished 41st on the day, but the top Master 40 riders raised their game also, so I made no advances on 7th for the day and overall. 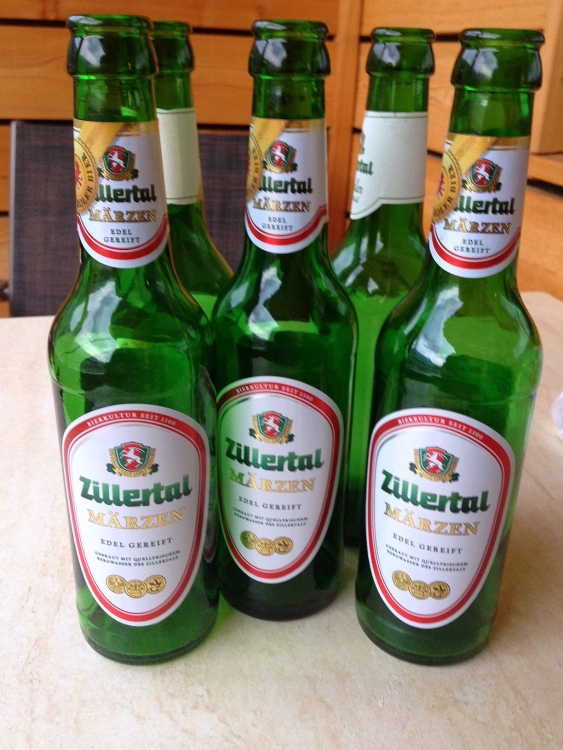 Previous Elite male & female winners (Marcus Kaufmann & Anne Katrin Hellstern) won again.
This is a great value race in a beautiful region. The 199 Euro entry cost included a lot of free transport, pasta party, 1 post race meal & drink everyday (which got increasingly yummier). a finishers cycling jersey and the good feedzones and organization. If you are after singletrack, there’s not much of that, but if you are fit and fancy a lot of tempo climbing practice this is for you. 3 days should make you fitter, but is not be too debilitating.  It’s a good one for gearing up for some of the longer one day classics like the Salzkammergut Trophy / Grand Raid Cristalp or the stage races, like the Transalp. And if the climbing all sounds too much, you can also take a few cable cars.

Zillertal Race Website
Thanks to sponsors MT ZOOM, Scimitar, XCracer
Click any of the images below for a larger view / slideshow 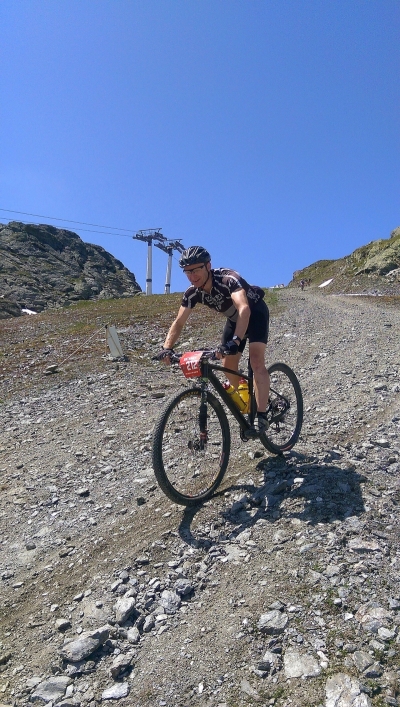 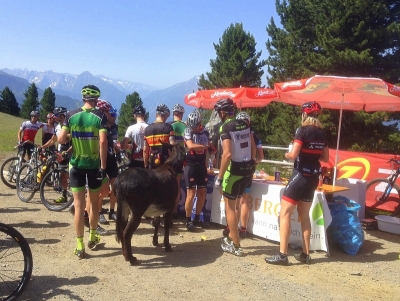 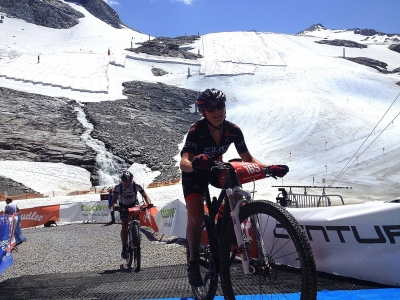 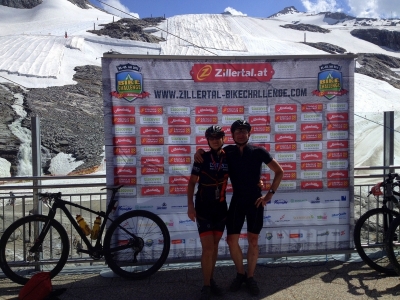 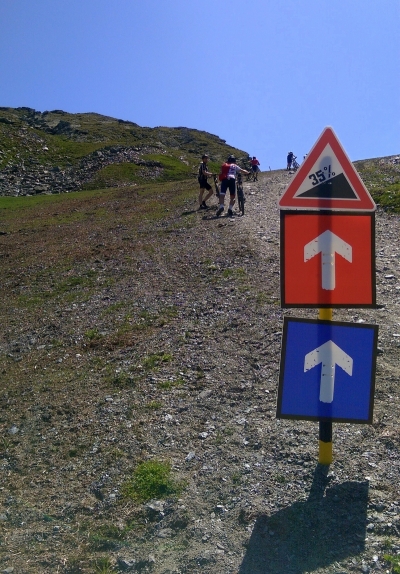 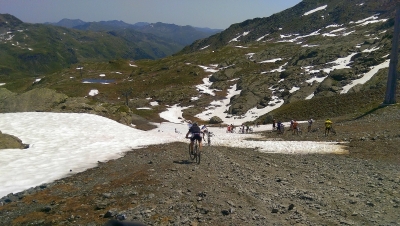 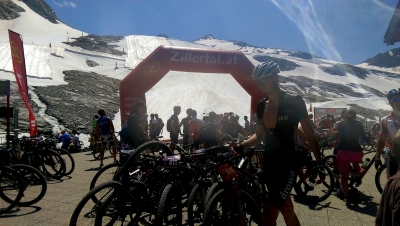