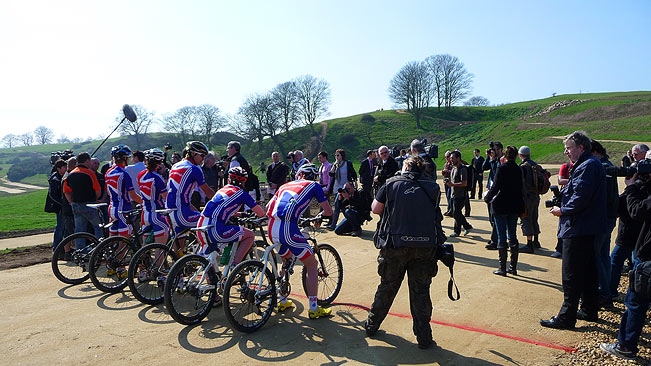 Driving into Hadleigh Farm Country Park, nr Southend in Essex on the 23rd March 2011 I had a serious case of nervous energy.  I can't communicate the facts and figures as well as the official press release, as the event had a different meaning for me.  The Olympics are a unique opportunity to reach a wider audience, promoting our sport and showing the world the trail building talent we possess in the UK.  Pretty heady stuff when you actually stop to think about it. 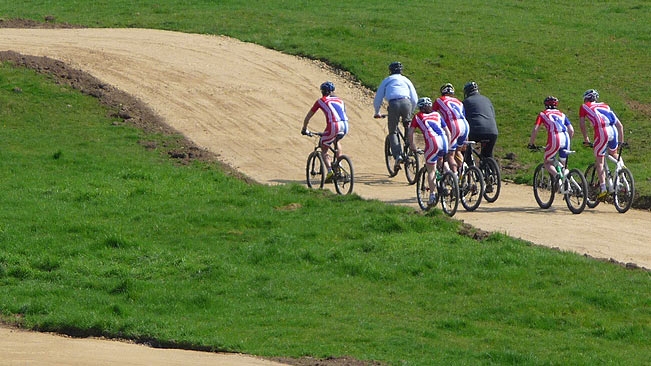 Lord Coe Takes the lead
Fortunately, I am pleased to report that the event has solid foundations. Lord Coe was present along with associated press to acknowledge the incredible progress made in the last 9mths and thanked the work of the local Essex Council who worked closely with the LOCOG team to identify the site and negotiate access with the local landowners, the Salvation Army.
To further display the impact on the local community, a crowd of schoolchildren greeted Lord Coe's arrival beside one of the main rock gardens of the course.  After a display of skilled riding from the British Cycling riders, it was announced that a competition was being run in conjunction with local schools to name several feature sections of the course.  One of several initiatives aimed at promoting a legacy of cycling in an area not normally associated with mountain biking.
Rolling out a clichť to describe the course setting, "natural amphitheatre" comes immediately to mind.  A majority of the course is viewable from the start/finish arena and the noise captured by the 100 people present proved the incredible atmosphere that will be generated by 20,000 spectators cheering on the riders who will be guaranteed to see a gold medal presented after roughly 8 laps and 1hr 45mins of racing.  The compact and treeless nature of the 5km course will mean that the racing will be easier than ever to capture on TV and should make for the most entertaining viewing yet. 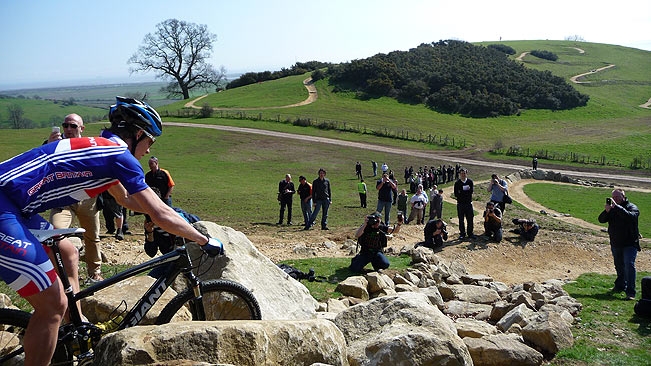 Liam Killeen on the Rock Chute
A full course report will follow on xcracer.com, as despite its relatively short length, course designer Martin Seddon has packed many technical features to test even the most skilled riders.  A multitude of punchy climbs combined with rocks, drops and berms will provide an intimidating test to the world's best come the 11th and 12th of August.
Hadleigh Farm Country Park 2012 MTB XC Course head cam Part 1
This is our first attempt with a new camera - do not watch on a full stomach!
Hadleigh Farm Country Park 2012 MTB XC Course head cam Part 2
The course is currently closed to the public, although a viewing platform close by does provide an overview of the site.  If you can't wait the 18mths to catch your first glimpse of the track, a test event with many of the 2012 contenders will take place at the end of July.
Watch out for tickets becoming available in May to get your chance amongst 5000 others to view the course up close.
Niall Frost