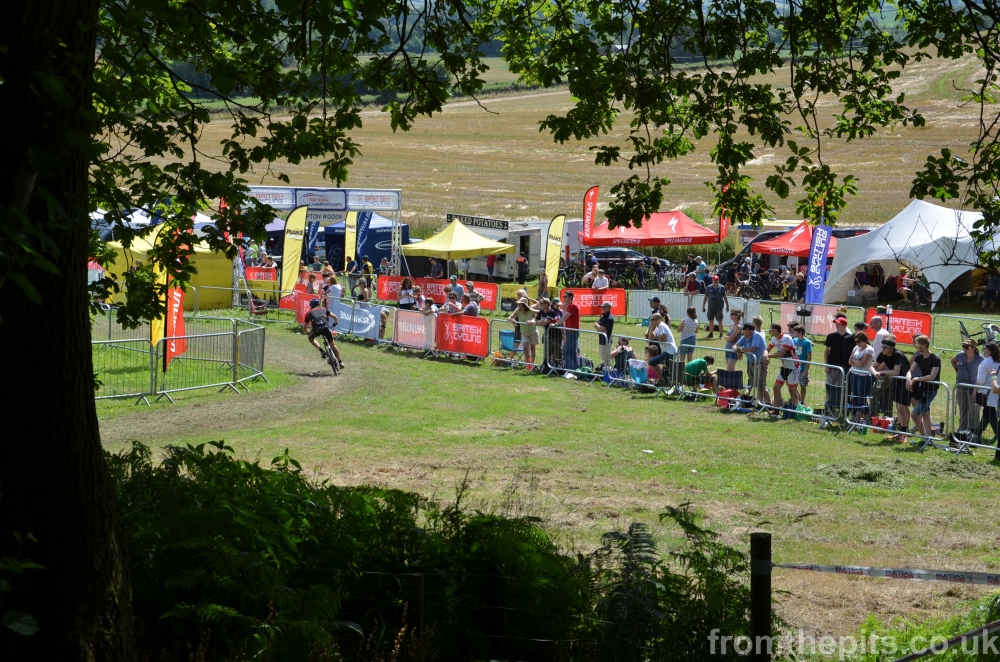 The week preceeding the National Championships was one of weather watching. Some relished the thought of thunder, and others prayed that the storms would steer clear.
By the time the course opened for practice, Hopton Woods had certainly seen some rain. Bikes were returning muddy, and many riders were sporting a brown side and bloodied and bruised knees and elbows. That said, most were highly complimentary of the track; the tough opening climb balanced with the technical descent to the finish.
Sunday was indeed a sun day. The course was quickly drying and the biggest domestic race of the year was fast approaching. 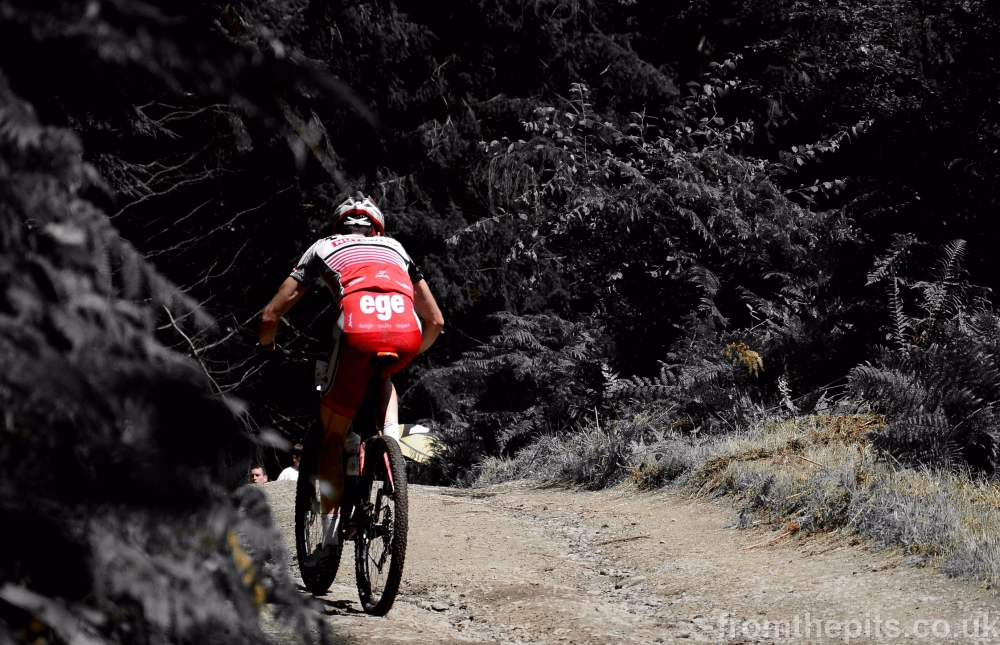 On a course of two halves it was a fight between two men in the Master's category. Dan Wells was stronger on the climbs, Ed Moseley quicker on the descents. Both riders were some way down the grid, but the long climb at the start of the lap allowed the race to find its natural order. Wells set the fastest first lap, opening up a gap of twelve seconds on Warren Bates, with Moseley, Kim Little and Thomas Fowler not far behind. By the end of lap two Moseley had almost closed the gap to Wells, and so the pattern went on: Wells climbed away, Moseley descended back into contention. However, Moseley just couldn't quite do enough to keep the gap small enough to close on the descent, and he had to settle for a silver medal, seven seconds shy of new National Champion, Wells. Bates was settled in third, Fowler's fast closing lap not enough to steal his bronze medal.

The Veteran Women's race was won by a rider we have not seen on the national circuit this year but who is nonetheless a very familiar face. Isla Rowntree assumed her position at the front of the race in the early stages but her title charge was being challenged by Kate Ratcliffe who was fighting hard to keep Rowntree in her sights. Rowntree was too strong though, and as the race unfolded her lead grew and grew. Alison Holmes was challenging Ratcliffe for the silver medal, the two riders coming close at a couple of points, but Holmes was unable to bridge across. Rowntree took the title with over four minutes to spare. Ratcliffe won silver and Holmes took bronze. 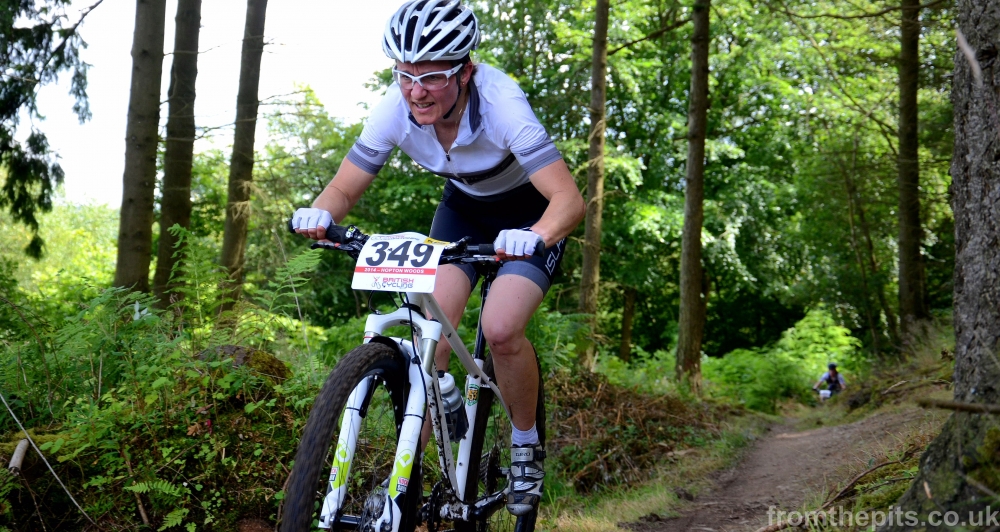 In the Veteran Men's race it was number one ranked Lewis King who led the race after the opening lap, Marc Chamberlain and Ian Taylor hot on his heals at two second intervals behind him. King dropped off the pace slightly on the second lap, leaving Chamberlain and Taylor to exchange blows at the front. Chamberlain was dishing out the pain on this occasion, gradually distancing himself from the chasers, and in doing so inching toward the Championship title. Taylor was sitting in the silver medal position without any major threats from behind. Sam Humphrey was the nearest challenge at one minute thirty seconds back heading into the final lap. Not content with silver, however, Taylor fought all the way to the end, chipping into Chamberlain's advantage. Chamberlain need not have been too worried though. He had time enough to enjoy the final run into the line and relish his victory. The silver medal went to Taylor and bronze to Humphrey.

The Grand Veteran Women's race was dominated by Elizabeth Clayton in the same style as the National Series has been all year. Despite a winning margin of more than ten minutes over the three lap race, Clayton was on the gas all the way round. Penny Allan had to be watchful of Avril Milligan in the first half of the race, but she pulled away to claim silver, while Milligan took bronze. 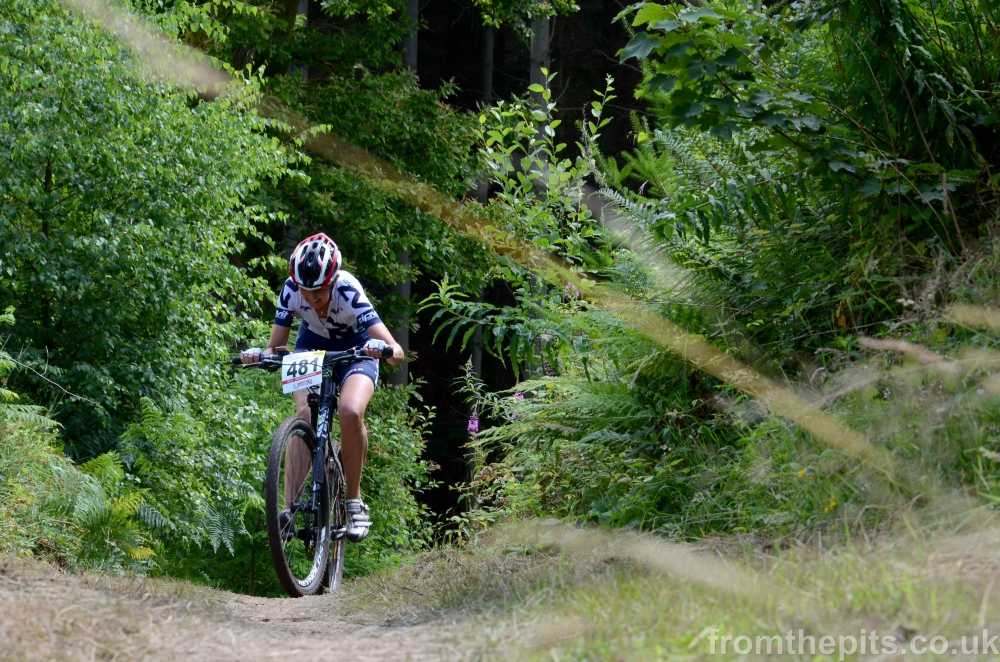 Mark Chadbourne was a man on a mission in the Grand Veteran Men's race. Leading from the first lap, Chadbourne slowly but surely pulled clear of his rivals. Pete Turnball was the lead chaser in the opening stages but he tailed off and was caught by Grant Johnson and Kevin Holloway. The latter was a slow to get going but came strong by the end, though it wasn't enough to catch Johnson. It was mission accomplished for Chadbourne who took the title, Johnson came away with silver - two minutes and twenty-five seconds down - and bronze went to Holloway.

Super Veteran, Roy Hunt, no stranger to National Championship jerseys, made a return to racing at Hopton to try and add another to his collection. Gridded tenth, he soon made his way to the front of the race, and then off the front of the race. Clearly in fine form, Hunt went about demolishing the rest of the field with four sub-twenty minute laps. Ian Petherbridge rode in second place for the entire race, challenged early on by Lynn Lines but then pulling well clear. Victor Barnett had a slow start but managed to peg back Lines at the halfway point and then push on into third position. Hunt took the victory, Petherbridge was second and Barnett third. 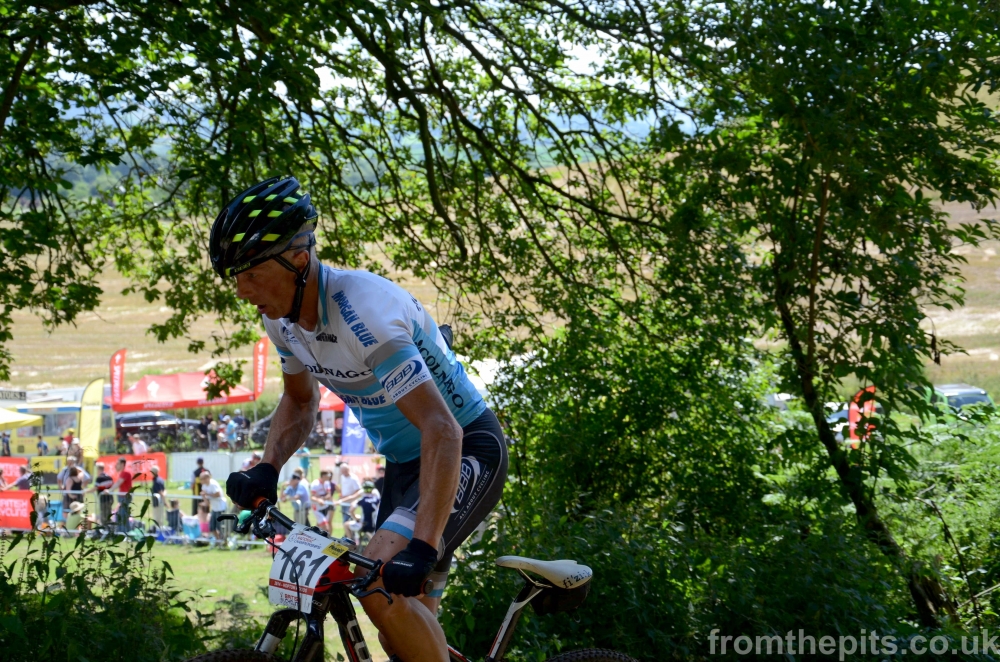