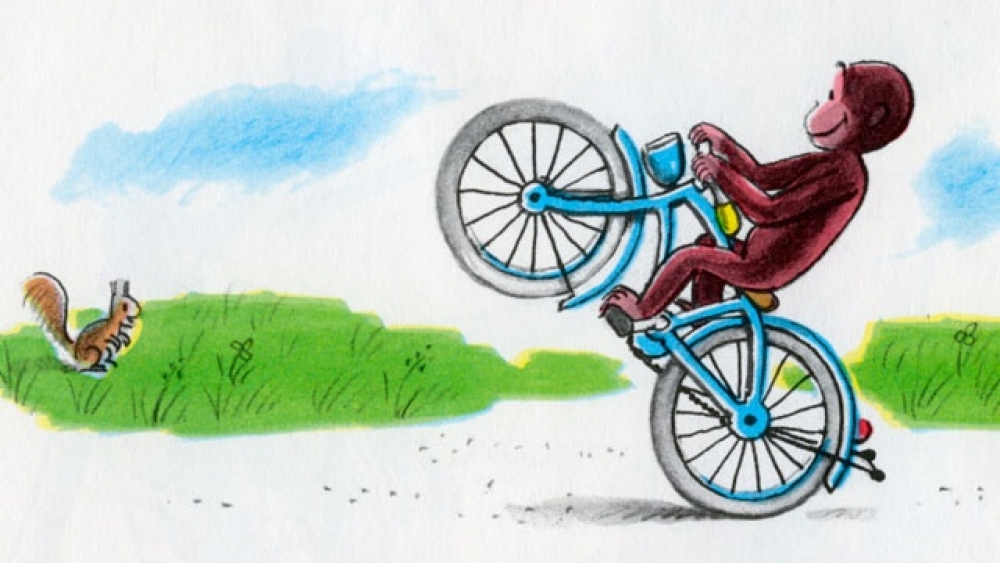 Recently, after Maddie recommended the book, I have been reading The Chimp Paradox by Prof Steve Peters. Wow! This book has made such a difference to my riding.

Prof Peters starts the book by talking about the 'human' part of the brain and the 'chimp' part of the brain, his first piece of advice is to name your chimp, so my chimp is now called George. This is of course after 'Curious George' the book, which is about a man with the yellow hat and his pet monkey who is an inquisitive and wonderful creature. In this case I am the man with the yellow hat taming my pet monkey that lives in my brain with a soundtrack of sing-a-longs and lullabies from Jack Johnson playing in the background.

The book then carries on to how to tame your chimp. George has proved to be quite hard to tame, luckily in the Curious George books he is used as the 'teachable' character, therefore I am now going to 'teach' George how to man up and get on with things! Prof Peters says to manage your chimp by exercising it, boxing it and then giving it a banana. So now before every race or if I have been contemplating riding a techy section I go through the positives and negatives in my head (exercising him), then usually finish by looking like a mad women by telling George to "shut up" as I'm riding along (boxing him)! I then, if he's performed well, reward him by as Jack Johnson would say by giving him a 'Banana Pancake' which in my case is a KFC from a service station if I feel I've done well in a race.

Two weekends ago it was my first race testing exercising and boxing up George at the BC National at Sherwood. I didn't really know what to expect at this race as last year everything was covered in snow!

After the 6 hour journey up from Plymouth on Friday, we finally arrived in the french equivalent of a camp site here in the UK! I had spent the majority of this trek of a journey sleeping but also eating, people watching and exercising George. By the time we got to Sherwood, George had well and truly let it all out and I had boxed him away for the time being.

The next day, the remainder of the mavericks that hadn't arrived turned up to pre-ride the course as a group. Today we were going to try out the pre-ride plan that we had been told about at the recent RSR. After our 3 laps George and myself felt great! I was so relaxed, knowing the course like the back of my hand and George hadn't yet stressed me out. The rest of the day was spent socialising and preparing for the race the next day.

On Sunday it was a 6.45am start ready for my 9.00am race start. A quick sprint to the toilet and two porridge pots later, I started to get my kit and bike ready. Still being half asleep, George wasn't a problem as my brain wasn't prepared for that sort of deep thinking!

The start loop was fast and there was quite a way before the first single track so I knew it was important to get a good start. So off we all went and as we were zooming along the fire road, I was suddenly in 4th place and this I managed to maintain for just over half a lap, which I am pretty happy with! As the race went on I slowly slipped back into 9th and finished the race in this position. My aim for the season was to come top half and this was now achieved!

For this race George was tamed pretty well! I now know that I need to work on getting him more motivated as the race goes on. As soon as a few people pass me my chimp starts to think about me dropping places, not trying to keep on their tail. So I now knew what I could practise that the BC National Champs which was last weekend.

With only a week between the two BC National rounds, there was no real point in unpacking all of my clean clothes only to pack them again, so that week was quite relaxed, especially with the lack of work going on at school! All I had to do was prepare myself for another long journey to a race in the van. On Friday, I managed to get the day off school so we wouldn't arrive too late. That evening we stayed with family at Wolverhampton so it was great to fit that in along with the race.

Early(ish!) on Saturday morning we set off for Hopton, accompanied by the interesting sounds of Radio 1 on a Saturday, we got there at about 10.30am. As we had a sit down and chat with everyone the rain started, it kept going and going! Us all being from the South West and used to frequent rain, we were quite excited after pre-riding the course, as it suited us all quite well in the slippery conditions. The course was really enjoyable. Once you got to the top of first hill, it was pretty much all quick fire tracks and fun single track.

On Sunday morning it was the same routine as the weekend before with toilet runs and excessive porridge. This time the start was uphill, unlike the flat start at Sherwood. After being gridded 7th I was surprised when I was on the front row so I was a bit disappointed starting at the edge in the long grass!

It must be a Hopton curse, as last year I was in the same position and then also managed to get an awful start. Up the beginning of the first hill I was near the back so I knew I would have to catch people up on the single track to be in a position I was happy with. As there were quite a few crashes on the downhill section before the a-line I managed to go up a few places.

After a long 3 laps, I eventually rolled in to the finish in 7th. I was really happy with this especially as I had gained 2 places since the week before and I had again got my half way aim. Throughout the race I also managed to keep on peoples' tails as they over took me which was my aim from the week before. For this race George wasn't as tamed, on the second and third laps at the top of the hill a little voice in my head kept saying "why are you putting yourself through this?" but as soon as I kept going on to the single track the voice remembered why!

Well done to everyone that raced and we now have a new National Champ in the SW, Harry! It has been two great weekends and I am now looking forward to the final round.

Firstly thanks to my dad for driving me up and down the country so much recently! Also, thank you Maddie, Jay, Gary and Jonathon along with the other PYC coaches for helping me improve with each race, also to everyone who supported me over these two races (the horns were very motivating to make me go faster!) and to Silverfish for my wonderful Yeti Arc which yet again worked perfectly!